As the UK cautiously starts to open up again, we’ve noticed that many companies are particularly curious to hear how other businesses in their position are planning to work in the future.

Seeing how the Twitters and Spotifys of the world are navigating the “new normal” is enlightening, for sure. But there’s something extra-valuable about learning from like-minded startups, scaleups and SMEs whose situations and challenges feel much more relatable.

With that in mind, we were incredibly excited to chat to Ellie Burgos-Watkinson, Operations Manager at Spill—the all-in-one mental health support tool you can access through Slack. You’ve probably heard of them already; in just over a year, they’ve started working with 200+ companies (including us at Hubble!) and are on a mission to change the way we all think about therapy and mental health.

A small but hugely ambitious team of 12 (soon to be 15), Spill has decided to go remote-first in their future workplace strategy. Ellie gave us some really useful insights into why they’re adopting this approach—one of which is to accommodate team members they haven’t even hired yet.

Hey Ellie! Thanks so much for chatting to us. First up, it’d be great if you could give a quick introduction on yourself, your role, and what Spill is all about.

Ellie: Sure! I’m Operations Manager at Spill. We’re an all-in-one emotional support tool that employees can access through Slack. This enables them to use our various services; primarily therapy sessions, but also other features, such as the ability to ask therapists questions and receive a written response the next working day. We also offer culture tools, such as guided 1:1s to help managers and team members communicate better.

My role is pretty varied, and includes everything from looking after our team of counsellors and therapists, to our HR, hiring, finance, and accounting!

Pre-Covid, what was Spill’s relationship like with the office? And how have you been operating in the last 12 months?

Ellie: Pre-Covid, we were all in the office every day, but we still practiced flexible working. So, if you had the plumber coming round, for example, you could work from home—no questions asked. But it was still very much a setup where most people were in the office five days a week.

At that point, the business was at a slightly different stage. This meant that to be able to collaborate and ensure Spill was successful, we wanted to bounce ideas off each other and be in the same space, physically and mentally.

Then obviously, the pandemic hit—and like everyone else across the world, we had to embrace remote working. We did this for a couple of months, then in the summer, we all started to safely come back to the office. There were only about five of us, so the risk was relatively low.

Then we did something quite novel: we’d all realised that we wanted to be in the same space together, and felt that it was pretty important for the business…so we decided to move to Lisbon for six weeks. 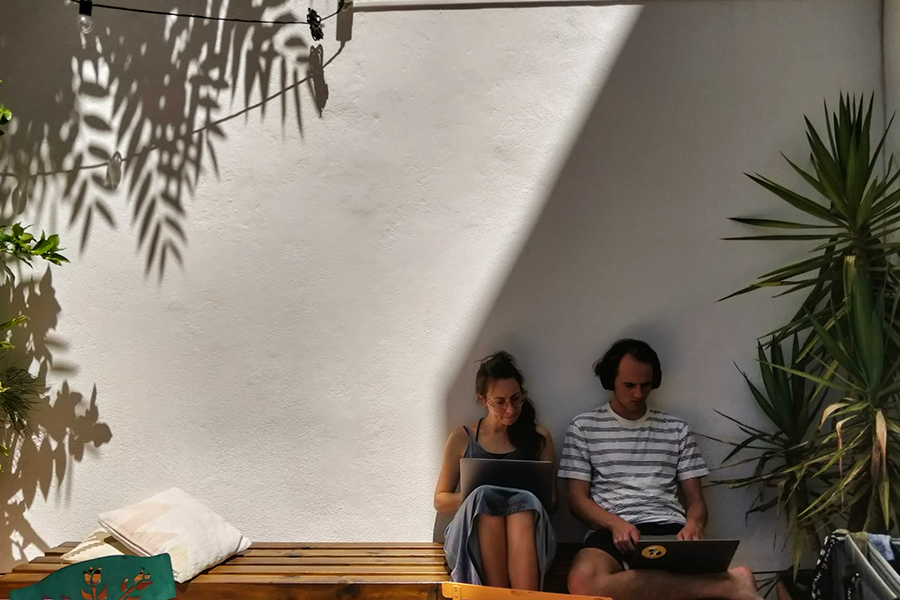 It was wonderful. It meant that we could live and work in the same space, and the product really benefited from that. We were able to collaborate easily, and achieved a lot! Spill was very lucky to do that; we went during the summer when the risk was low, and since there were just five of us with no dependents, it made it all the easier to do it.

When we came back in the autumn, we then had to look at what kind of setup we’d need moving forward. We decided to get a small office that people could use if their internet wasn’t good enough, or if they just needed a clearer headspace. We felt this was important, because many people struggle with remote working and not being with their colleagues—so having a small office seems to be working quite well.

And what does Spill’s long-term work strategy look like?

Ellie: Going forward, we’ve decided to be “remote-first” rather than “remote-friendly”—and that has been a conscious decision. I think if you want to be able to attract talent from wherever and get the best people for your business, just being remote-friendly can make it tricky. If you have someone based in Edinburgh or Lisbon, for example, and other team members are going into the office, people can feel left out.

This is something we want to avoid as much as possible. In that sense, we don’t believe a hybrid model works if you are just remote-friendly. For us, hybrid models work best if you are remote-first and you’re trying to be as inclusive as possible. 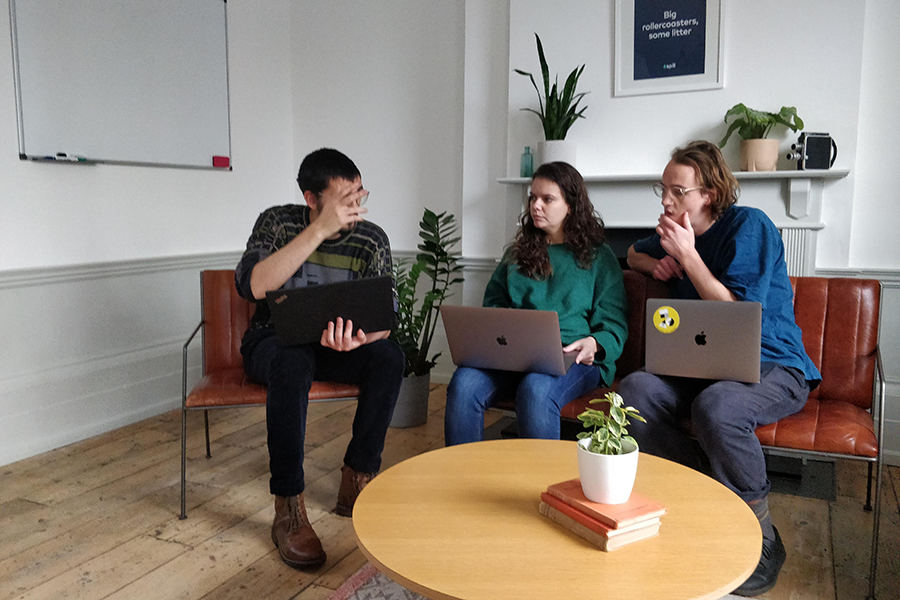 Your setup is quite a good example of how “remote-first” doesn’t necessarily mean “zero-office”.

Ellie: Absolutely. I think the change came at some point in the year when there were more of us going into the office. We had team members based in London who weren’t able to come in, and that impacted how they felt about work and how we felt about them. We wanted to avoid that as much as possible and not put anyone in that kind of awkward situation.

So, we will continue to have an office based in London, where people will be able to go if and when they like. But all of our processes, procedures, and meetings will be remote-first and virtual. We don’t want to leave anyone out who wouldn’t be able to or want to come into the office.

And it’s about making that explicit. If we find a wonderful person who wants to join Spill and lives somewhere else (time zones permitting), we wouldn’t want to exclude them. We would still do a planning week in-person at the beginning of every ‘term’, and we would probably fly them in and have those conversations in real life, to ensure we’re all on the same page.

Ultimately, Spill feels that we can’t not be remote-first if we want to ensure that we grow and get the best talent. That’s where the world’s going!

What did the process of deciding to go “remote-first” look like?

Ellie: Like many companies, we had to decide how we would operate as things started to open up. At the moment, we’re hiring quite a lot, and we kept being faced with the question of people not being in London anymore or deciding to work abroad for a while, just like Spill did. We had people asking us, ”I’ve moved back home to Dublin. Can we work at Spill?” 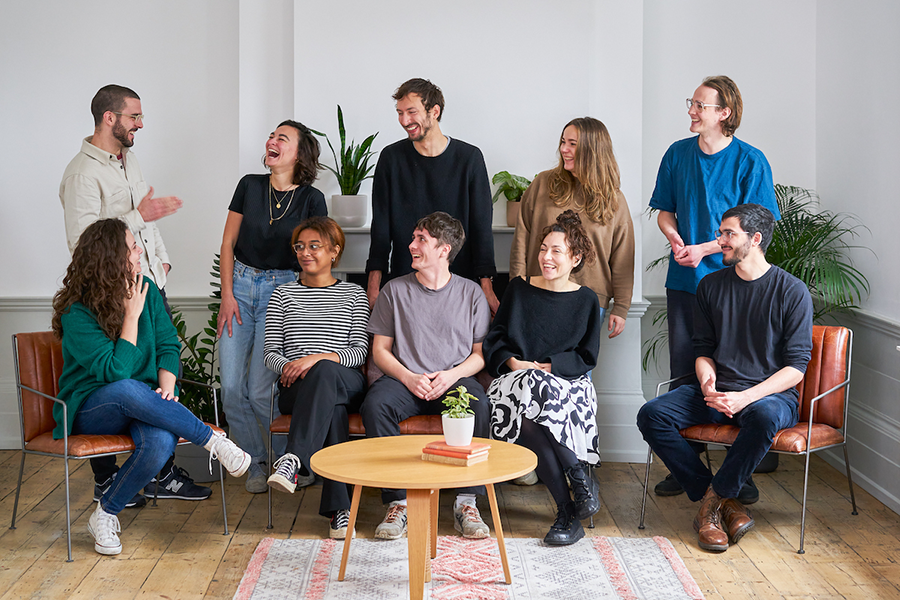 Deciding to go remote-first, therefore, seemed like the most logical decision. It’s all in our company policy, which our founder Calvin wrote, and he put the decision-making to the team so we could discuss it, how we feel about it, and any changes we want to make to the policy.

We’re in quite a lucky position in that, because we’re a small team, we are all on the same page now. And that’s really wonderful. But you can’t assume that the next person you hire is also going to be on the same page. Which is why we’ve had to think about it in a more future-facing way.

Do you have any tips for keeping the culture alive when you’re a remote-first company?

Ellie: At Spill, we’re quite purposeful about company culture because we’re actively trying to change other businesses’ company cultures. So we must lead by example, and make everyone more emotionally happy, aware and supportive wherever we can.

We have a couple of things we have explicitly put in place—for instance, making calls the default form of communication, rather than slacking or emailing. Doing this helps us to collaborate and feel like everyone’s part of a team, rather than just an individual in front of a screen. 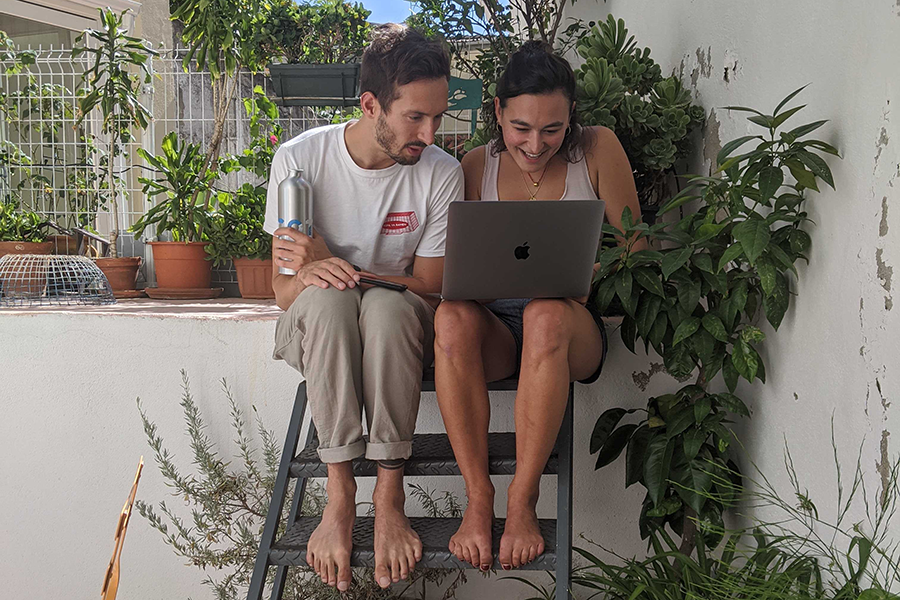 We also have updates meetings every Wednesday morning, where we update each other on what’s happened and any progress; you can also request updates.

Ellie: We’re actively growing a lot, which is incredibly exciting. We also closed our seed round of funding at the beginning of this year, so we’re embarking on a period of expansion. I guess that’s why we’re so focused on the future!

Ultimately, Spill wants to help more people, and make more workplaces a nicer place to be. We want to help improve communication, give people therapy and ensure that people have a great time at work by underpinning that with principles of therapy.

Amazing, thanks Ellie—best of luck!

Trying to figure out your own workplace strategy? Make sure you download the free 8-step “Back to the Future (of Work) Checklist we put together with Pento.