Why the Office Plays a Pivotal Role in what3words’ Hybrid Strategy 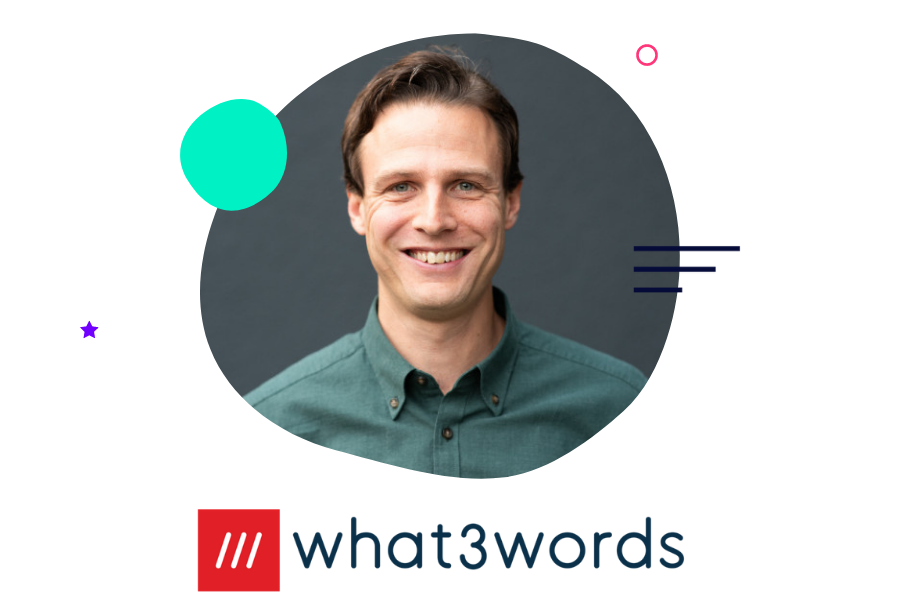 As more and more businesses start to secure their future workplace strategies, a whole host of approaches have started to dominate the flexible working arena; from remote-first to the Hub and Spoke model.

But there’s one workplace solution that’s become increasingly popular, and that’s the hybrid approach. Not only does it enable flexibility and collaboration, but choosing to go hybrid acknowledges the importance of office space for certain companies and individuals—and it’s something that plenty of businesses have sorely missed.

One company that knows this feeling is what3words—the simplest way to talk about and share locations. We were thrilled to chat with Tom Boal, Head of Operations, to hear all about why what3words has chosen to go hybrid and why they’re so excited to return to the office.

This was incredibly interesting. You’re probably well aware that what3words has had massive success. The series of national lockdowns have actually accelerated their growth, and thousands of businesses worldwide use their geocode system to improve their efficiency and user experience today.

So, why are they itching to get back into the office? With five international locations to manage and the company’s response to COVID to head up, Tom gave us invaluable insights into why the hybrid approach is for them. He also let us know why the office will play such an integral role in their future workplace strategy—even though remote working worked so well for them this past year.

Hey, Tom! Thanks for chatting with us. So, it would be great if you could tell us about yourself, your role and what what3words is all about.

Tom: Sure! I’m Head of Operations and a member of the Senior Management team at what3words—which is essentially the simplest way to talk about location.

We’ve divided the whole world into 3m squares and given each one a unique what3words address. For example, the front door to our London office can be found at ///filled.count.soap. This allows people to refer to any precise location—whether that’s a delivery entrance or drone landing spot—by using three simple words. Businesses and governments use what3words to operate more effectively and ordinary individuals to find and share places worldwide.

Within my role, I’m responsible for internal-facing parts of the company. So that includes things like internal comms and culture, and the heads of people and recruitment report to me as well. I’ve also been managing our response to COVID over the past year.

Pre-pandemic, what was your relationship like with the office? And how has the pandemic affected what3words’ working practices?

Tom: I mean, it’s been a dramatic change. Before the pandemic, we were very much office-first, where everyone worked there five days a week—and it suited us well.

But of course, the pandemic hit, and we rapidly moved to 100% working from home. And as the government’s guidelines have evolved and changed, we’ve since legally opened the office. This is primarily for people who need to come in for mental health reasons or if someone’s WiFi isn’t working. It’s never been much more than 10% of the team on any one day, and it’s often much less than that.

As for working from home, I’ve personally had a complete 180 on this. I used to be pretty against it, but I’ve now irrevocably changed my mind! However, I wouldn’t want to continue 100% working from home, either personally or as a company. I really see the benefits of a hybrid system, and there are so many benefits to being together in one space. But the days of Mon-Fri in the office are, without a doubt, over.

And what does what3words’ long-term work strategy look like?

Tom: We’ve given this a lot of thought. We’re planning to open up as soon as there’s a ‘”reasonable national consensus” that it’s safe to do so. From there, we’ll move to a new flexible working policy where everyone will work from home and in the office. We are keeping our eyes and ears open to understand how it works for the company, how it works for the staff, and what the broader jobs market is like, but that’s our plan for the moment.

Nice! And have you guys already secured an office space that’ll act as your base for the foreseeable future?

Tom: Yep, that’s right. We value the benefits of having somewhere that’s home and where teams all come to the same place. So, we’re based in a building called Great Western Studios, and it’s a great place to work. It’s got our branding and our culture literally on the walls, but metaphorically speaking, too. At what3words, we love the idea of people coming to that office space and knowing there’ll be other people there as well.

Are you thinking about repurposing or adapting that space to meet any additional requirements born out of the pandemic?

Tom: We are considering it. At the moment, the office is set up well; it was already an adaptable space. There were lots of desk space, impromptu meeting areas and a lot of more formalised meeting space, too. We were fortunate in that respect.

But we’re definitely going to keep our eye on this. My feeling is that desk space will become less important, and impromptu space will become essential. But we don’t want to preempt that too much—we want to see how it works for us in practice. 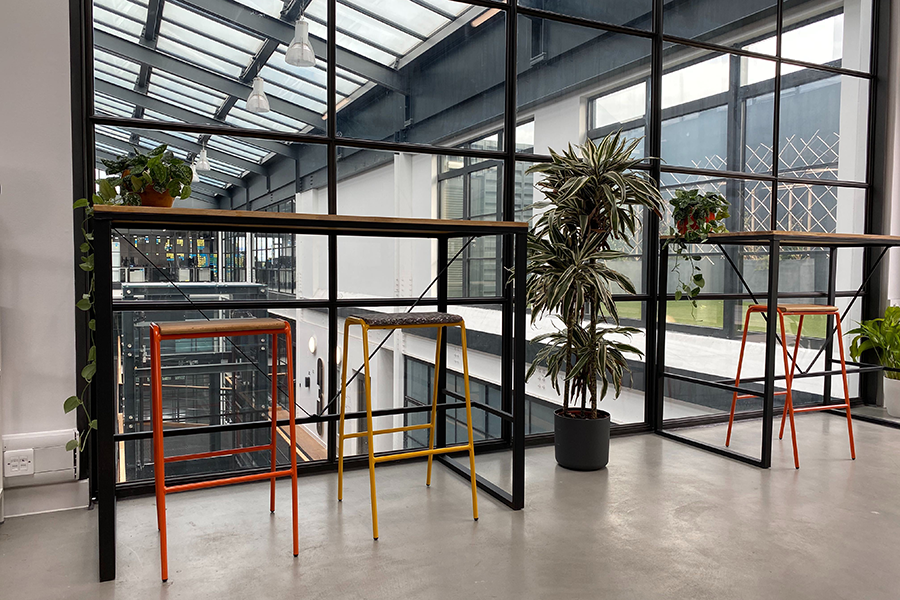 And how did you decide on going hybrid? What was the process like?

Tom: Over last year, we consulted teams across the company a number of times. We probably sent out too many surveys; I think people maybe grew a little bored of them after a while! We ran company-wide surveys and engaged with the company culture working group—a group of about a dozen people from all sorts of levels and departments.

We looked at many different options, from the status quo to some super radical ideas. But we always found ourselves coming back to hybrid working; it feels like that will work the best for us as a company and it suits our employee preferences. But we’re going to keep an eye on it and see how it goes.

What have been the main delights and challenges that you’ve experienced as a fully remote team?

Tom: So, we were super impressed with how quickly and successfully we moved to remote working. We were very fortunate in that all our systems and processes were cloud-based already. We’ve been using Slack for years, so everything was designed for remote working, making the change very easy. We were also delighted with how the company and teams have adapted their cultures and management styles to suit remote working—so that’s very much on the plus side.

As for the challenges, and I can imagine many organisations feel the same; it’s losing those unplanned “osmosis” moments. We’ve tried many different things, but it isn’t easy to replicate informal conversations. Zoom coffees just aren’t the same as bumping into each other in the kitchen.

And for my role as Head of Ops, I miss being able to read the mood of the room. It’s challenging to get a sense of morale and energy when working virtually, and I find that bit particularly difficult to do. I’m looking forward to when we’ll be in the same room together—hopefully soon! 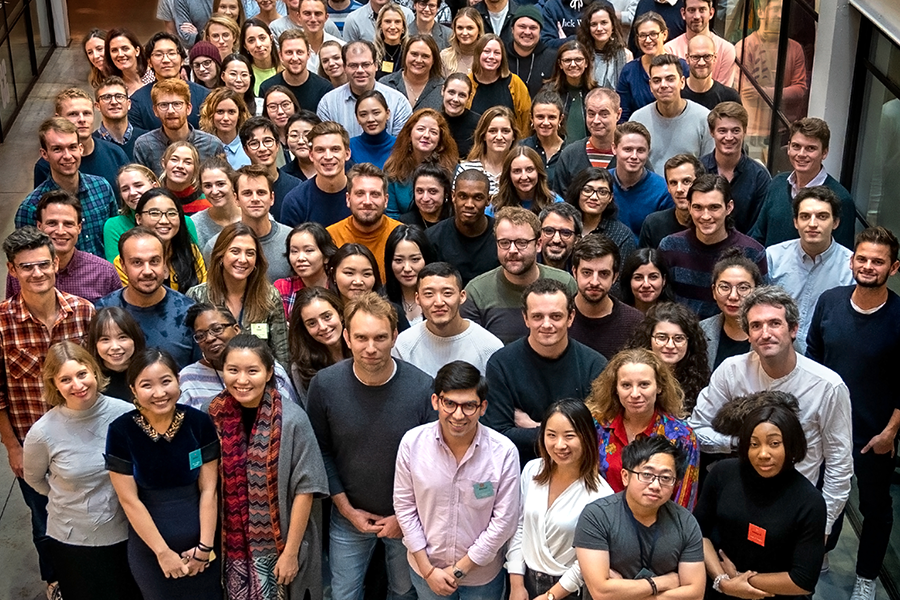 And once that day arrives, will you have specific days when people can come into the office? Or will employees choose when they want to come in?

Tom: So, we’re still working on this—and I think team leads and department heads must think about what they’ll need as much as possible. For instance, a whole department might go into the office on the same day, so they have the chance to make connections and friendships amongst their team. There might also be a few cross-departmental projects occurring on the same day so that teams can work effectively together.

I’ve also been speaking to a supplier this morning about a desk booking system—and I think this is crucial. We need to have an intuitive, simple user experience so individuals, managers and teams can plan their time effectively.

And finally, what’s on the cards for what3words over the next 6-12 months? Any exciting plans?

Tom: We’ve got lots of exciting plans! It’s going to be a big year for what3words. I mean, lockdown was an exciting time for us—we saw a huge increase in e-commerce and logistics, and our SME business use grew by over 1,000%. So, we will continue focusing on smaller businesses, alongside our work with the auto industry.

And we’re also going to expand into new markets—Germany being a notable example. So lots of exciting stuff. We’ve had some good investments recently, and hopefully, lots of growth to come!

Sounds great! Thank you, Tom, and the best of luck!