From Interviews & Ideations to Employee Surveys: How Thriva are Redesigning their Office

At Hubble, we believe there’s no “one-size-fits-all” solution to how and where we work. The rise of hybrid working has shifted employees’ expectations—so much so that flexibility and choice is now their number one priority.

As a result, many employees are enjoying the freedom to work from anywhere—whether that’s a blend from the HQ, home or on-demand workspaces. But in an era where individual employees can decide where they’d like to spend their time—which may not always be in the office—where does this leave the company HQ?

It’s a question that’s been on a lot of employers’ minds. In fact, over half of London’s recent office constructions have been refurbishment projects—as more hybrid companies are repurposing their existing offices to align with their employees’ needs.

With that in mind, we were incredibly excited to talk to Thriva—the health tech startup that’s on a mission to transform preventative healthcare—about how they’re approaching the big (but exciting!) task of repurposing their office space. Gabriela Matias, Head of People at Thriva, gave us invaluable insights into how surveys played a huge role in the process—as well as how the team found the Hubble Pass as they moved offices.

Hey, Gabriela! Thanks for chatting with us. To kick-off, it would be great if you could give us a quick introduction on yourself, your role and what Thriva is all about.

Gabriela: Absolutely! I’m Head of People at Thriva. We’re a health tech startup that’s on a mission to put better health in people’s hands. So, we work in the preventative space by offering blood tests to those who want a deeper understanding of their overall health status. Thriva’s product and team of qualified experts will give you the support, tools, and advice to get you where you want to be. So, in a nutshell, we want to give people personalised, preventative health care that helps people reach their health goals—and not just “have more Vitamin D!”, for example.

My role is pretty varied—I look after everything about our culture and employee experience. From the experience of candidates or new joiners to how people develop, grow, and feel included at Thriva. We want to enable people to do the best work of their lives at Thriva.

Sounds great! And how was Thriva working before the pandemic?

Gabriela: So, we were mainly an office-based company. Most team members came in five days a week, but we were flexible in working hours—depending on the role. We did allow some people to work from home, usually a day a week or whenever you needed to get your head down.

But all in all, we were very office-based. This included anything from how we worked, our communication and even the office’s setup. So it was all catered towards the office. And then, of course, this all changed once the pandemic hit. 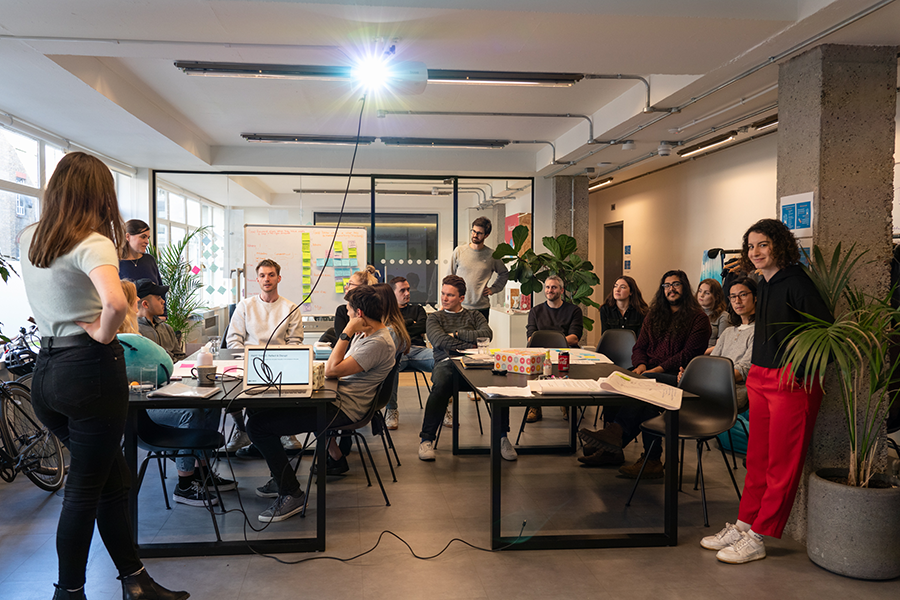 Definitely—and could you tell us how Thriva coped with going full-remote?

Gabriela: Sure. When we went fully remote in mid-March, it was actually less challenging than I thought. Like most startups, we were used to a lot of cloud-based platforms. But the most crucial thing we had to do pretty quickly was prepare managers and team leads on how they’d support their teams. We were going through a period of stress and anxiety, and everything was unknown—so we needed to figure out how managers would know if their team is okay. How do we signal people who might be living alone and might struggle more? How do we communicate effectively? These were some of the questions we needed to answer.

We also wanted to figure out how we could repurpose processes that worked for some teams to others. For example, only the product team previously had stand-ups. But once the pandemic hit, every team across the organisation started having them. We also implemented things like stand-downs to help people bookend the day and just have a conversation as human beings. So, that’s some of the things we did to help us cope!

What are your pros and cons to remote work? Do you think it’s something Thriva employees would want in the future?

Gabriela: Great question. It’s a real mix in our team, and we have people with different life circumstances—like parents, people with visible or invisible disabilities or those who flat-share. For some, the office is such a great place. It’s where they’re most productive. But for others, they’re more productive elsewhere. So it’s been a mix.

For example, I really enjoy working from home—but I’m in a people role. I miss the human interaction, the small micro-moments, and going into the office one or two days a week. That setup is enough for me to get my head down and do deep work. But also, some people don’t want to be doing the London commute, as it can be pretty stressful. So I don’t think any employees have said they’d like to go full remote all the time; I think we all miss those human connections. But we knew we needed to strive for a balance, for sure. 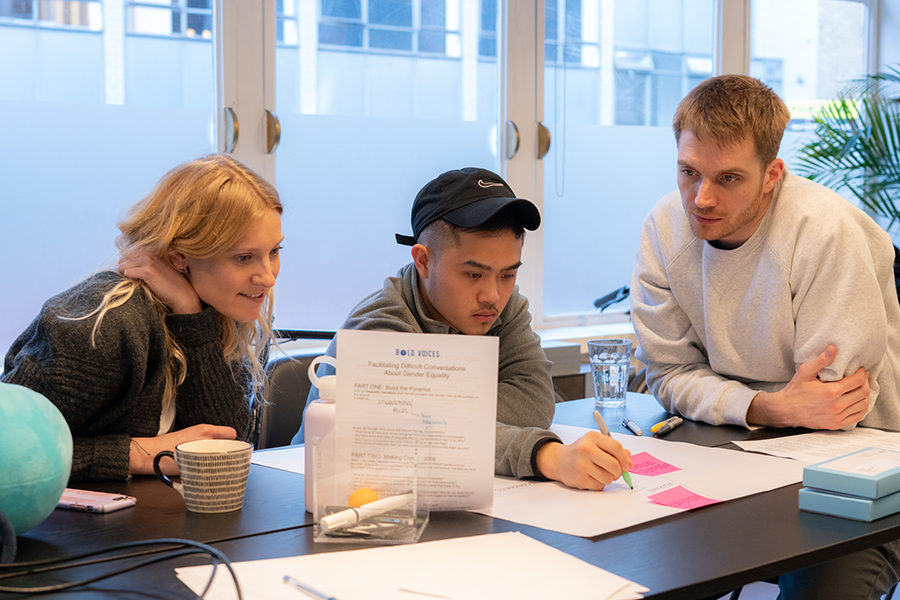 Definitely—and what did you plan to do next?

Gabriela: We’ve announced to the company that we will start working two days per week in the office. People can select which days they’d like, but we’re anticipating there’s going to be a day where the whole team goes in. That will allow us to collaborate and connect with our own teams and others—I think that’s super important.

We’ve also thought about what activities are best done in person to build trust and relationships. From there, we’ve basically codified that and said, if it’s a performance review, then let’s do that in person. It’s so much nicer not to have to click a button to close the meeting and finish your performance review discussion with a coffee. It’s those kinds of things that leave you feeling better from an emotional perspective.

We’re also going to be more flexible in terms of where people work. For example, we’ve been using the Hubble Pass as we moved offices—I’ve got to say, the team has loved the flexibility! The ability to work from a coworking space that’s closer to home has been a huge benefit for our employees—whether they’d like a change of scenery or simply meet up with colleagues.

We’re so pleased the Thriva team is enjoying the Hubble Pass! Can you tell us more?

Gabriela: Sure! The team has also created “Thriva Hubble Bubbles” where they’ve loved sharing reviews on the different coworking spaces available. From a business perspective, the Hubble Pass has allowed us to support employees who can’t work effectively from home—as well as offering convenient, high-quality workspaces to those who work better alongside others.

At the moment, we’re currently considering how we can use on-demand workspaces moving forward—for example, for team collaboration or away days. We’ve also given plenty of thought of how we will repurpose office space now we’ve moved HQ. We don’t need rows and rows of desks; we need more collaboration spaces and informal areas where people will come in with a purpose—whether to brainstorm or work alongside others. It’s something that really excites me!

Likewise! And where did you start with that process? What steps are you taking to determine what the best setup is?

Gabriela: We started talking with employees initially—through 1:1s, surveys and discussions sparked by questions that people would ask us, like are we going to be remote or more flexible? One of the things that became super clear was that we need to give people clarity; I think that’s the most important thing. Even if the clarity is: we’re going to go with this, and it will be more experimental, or we’re unsure if we’re going back to the office—it’s essential to set this expectation upfront. 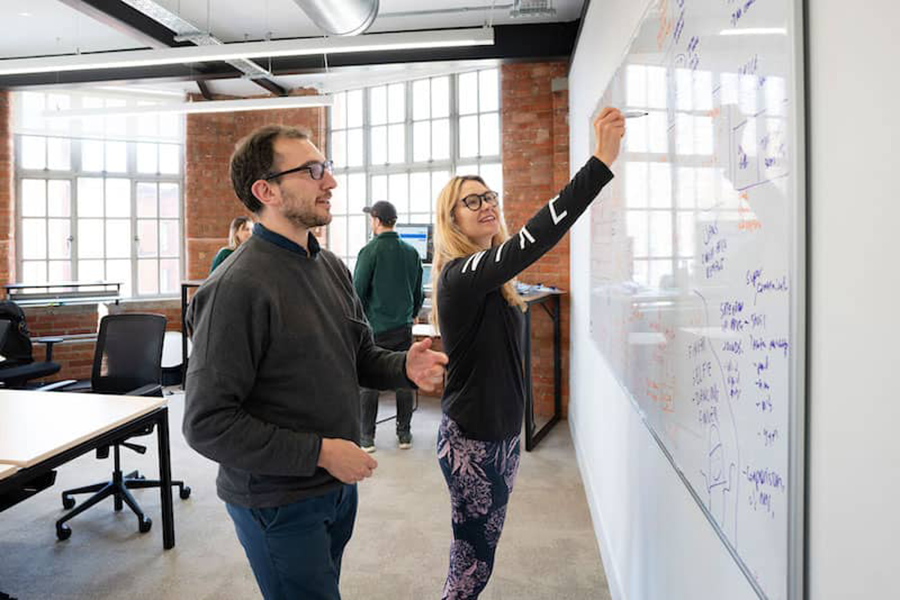 We also collected a lot of feedback to understand what we need to change, and then it was a matter of understanding what our team wanted. So, what is the kind of spread? And what is the percentage of our current and future employees? Of course, we won’t know the exact answer to that, but we can anticipate who wants to be in the office four to five days a week.

We also conducted interviews to understand what employees will use their workspace for when they’re in the office. It’s been really effective at informing our decisions regarding repurposing office space—and the key is to interview people with different life circumstances. I also referred to data from Hubble’s survey results during these interviews, which was super helpful. It’s great to be able to say, “Look,  71% of respondents still want their company to have an office of some sort.” It’s helped us understand what our population wants.

That’s great to know! And do you have any more tips on how companies can use employees’ opinions to inform repurposing office space?

Gabriela: I think you need to strive for a balance. It’s a discussion where leadership needs to agree on what our principles are and be a little bold and courageous in saying, ‘this is what we think will work for us’—and then taking it from there. Whether it’s physical space or figuring out how you’ll communicate as an organisation, you need to be very intentional. So, if the office is now mainly a place for collaboration or purposeful meetings— then do we have spaces that enable that? We would also need quiet areas where people who work mainly from the office utilise. If I come into the office five days a week, and I’m always socialising—then people may get annoyed hearing me the whole time.

I think there’s also an element of research and figuring out what other people are doing. The demographic population you have now may be slightly different from the one you’ll have in a year’s time. For example, I know some startups where most employees are all in their 20s—and that might mean you make decisions based on the population you have now, but you might actually not realise you won’t be able to attract people who maybe have kids or who don’t want to be living in London in years to come. So, companies need to bear that in mind and agree on what trade offs you’re willing to make. 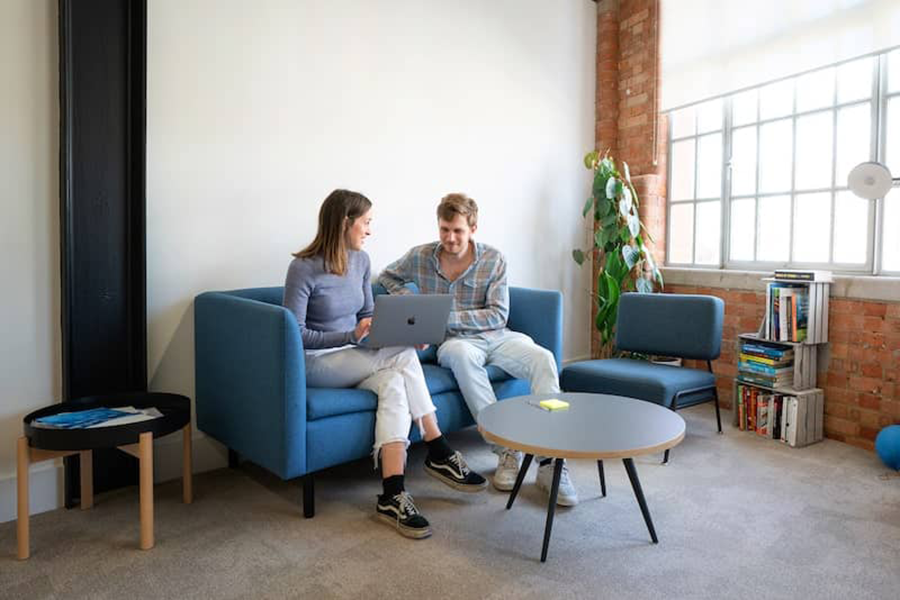 Absolutely. And finally, what’s on the cards for Thriva over the next 12 months?

Gabriela: Well, we’re hoping to double in size by the end of the year. There are also many new things in terms of our product around personalisation, which is incredibly exciting. It’s going to make such a huge difference for people using Thriva to achieve their goals. There are also many upcoming partnerships on the horizon, and we’re all so excited for a wider audience using our platform and Thriva expanding into new markets.

And from a people perspective, I think we’re eager to be piloting, developing and experimenting with how we’ll work as an organisation and connect as people. We won’t know until we actually go back to normal, but it will be a big experimentation around what will work and what won’t. It’s all about being open; I think that’s important. It’s what we always say internally—we may not get things right, but we also shouldn’t just do what other people are doing. In some areas, you need to try and be bold!

Thanks, Gabriela! And best of luck with everything.