In case you hadn’t noticed (we really hope you did, otherwise we’re not doing our jobs properly)—we’ve rebranded!

It’s been a crazy few months with the whole team working super hard to create a new brand concept and bring it to life. Spearheading the project was Shachar Radin Shomrat, the CMO of HubbleHQ. We sat down with Shachar to find out what went on behind the scenes. In this candid interview, Shachar shares the challenges, pitfalls and lessons learnt from the rebranding process and shares some magic tricks and tips for anyone who’s about to undergo a rebranding process.

What was the key driver to take on this major rebrand project?

Shachar: HubbleHQ is a well-recognised brand name in the office rental domain in the UK. However, after several years in the market, there were various indications that it was time to flesh out the brand. When Hubble first started, it was a pioneering business, the first company to bring office rental listings on a digital, searchable platform. It was ahead of its time, even before WeWork started their growth trajectory. As such, it was developed with a very functional mindset, with sleek user experience as a first priority. Over the years, HubbleHQ’s functional style and tone became—I wouldn’t say out-of-date—but less in line with the technological advantage that we were bringing to market. The brand didn’t reflect our unique selling proposition, which is the combination of cutting edge technology, extensive data, and human expertise, to provide an unrivalled overview of office spaces in London. The brand also didn’t reflect our unique personality and culture that already existed.

We needed to better define the HubbleHQ story. And then tell that story to the market.

How did you approach the rebranding process?

Shachar: We partnered with Onwards, one of London’s top branding agencies, and together we started analysing our company, audience and ecosystem. During the initial research phase, key stakeholders within the team were interviewed about their perception of the market, the company, and the brand. We then spoke to our customers and partners, to better understand how HubbleHQ is perceived externally. This was perhaps even more important, as one definition of a brand is what other people say about your company when you’re not there.

The last stage of the research process involved comparing our services to other players in the market, to measure the differences in experiences from the initial search, through to the actual office viewings and so on.

Once we had collated all of this information, the branding agency created a few different brand concepts. We then analysed these concepts to see whether the brand narrative would be distinct and set us apart from competitors. We also measured whether the concepts would be desirable to our audiences, and durable to fit both current and future business requirements.

Shachar: A key consumer insight identified during the research phase was that office search is a complex project. It usually entails a long list of requirements, a limited budget and a wide range of stakeholders involved in the decision-making process. According to our research, in larger businesses, those who are tasked with leading this project, such as office managers, heads of HR and ops managers, often have never led such a project before. It can be quite a daunting task! Some office managers shared that they have had many sleepless nights throughout the process.

The brand concept that was selected—Office Search Alchemy—was based on this core consumer insight, enabling those who are searching for an office to ‘automagically’ find the one that would perfectly fit ‘the brief’. At HubbleHQ, we use Office Search Alchemy to take the complexity and guesswork out of finding your perfect office space.

Above all, we wanted to find a brand concept that would be true to the HubbleHQ DNA. The HubbleHQ team has a truly unique personality and culture in which every team member shows deep care towards customers, partners and each other.  There’s also something quirky about the company’s personality, that can only be described as “Hubble-y”, and we really wanted the brand concept to reflect this. We believe that the brand concept that we eventually selected really lets this “Hubbliness” shine through.

Learn more about our new brand concept in this blog. 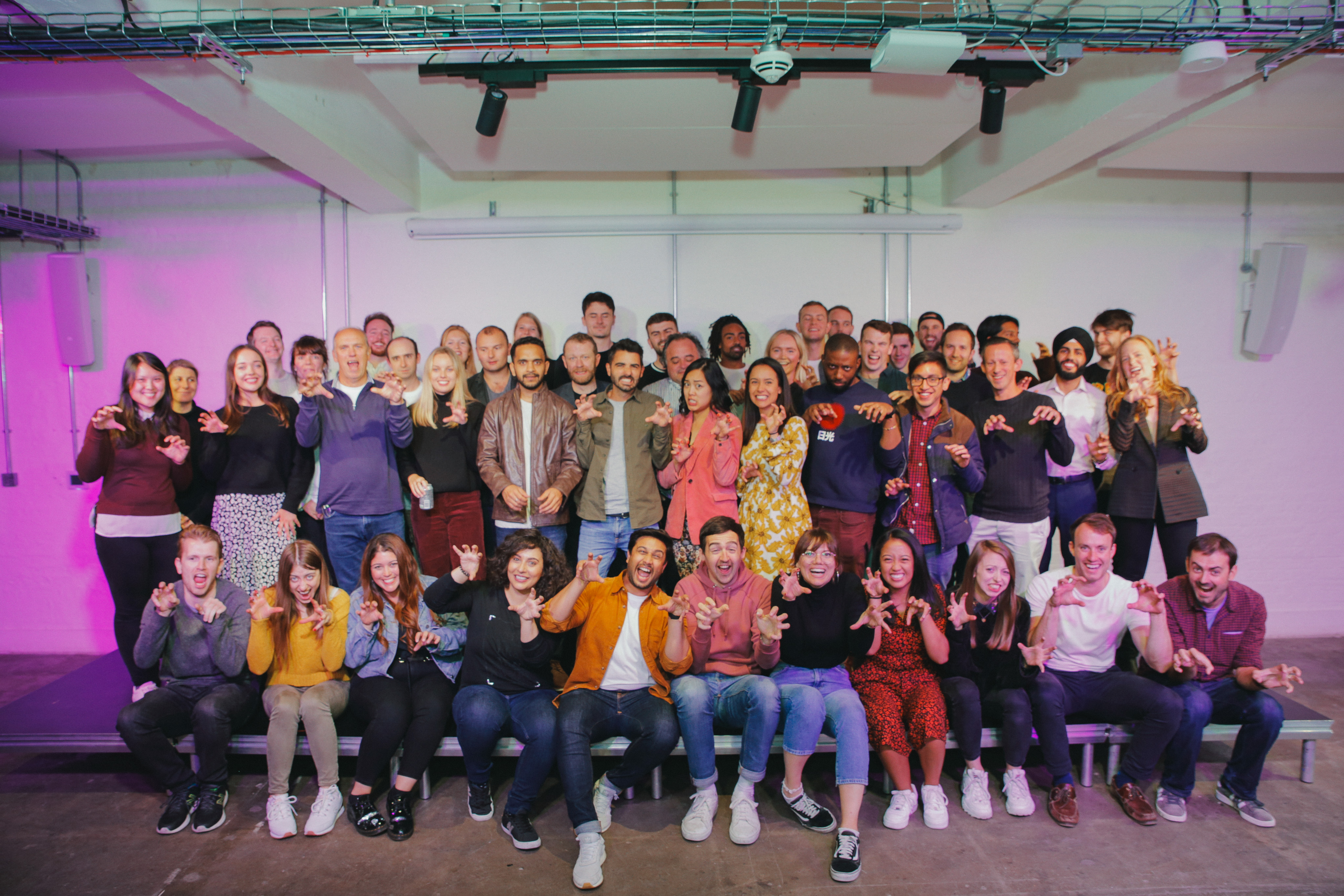 How did you come up with the visual identity?

Shachar: Once the brand concept had been decided, the next stage was to bring the brand to life with visuals. We had the narrative, we had some colourful copy that could be used in marketing campaigns, but we didn’t have any visuals to represent what the concept looked like in real life. And actually, it turned out to be a real challenge. Mainly because the concept ‘Office Search Alchemy’ can be quite ambiguous and open to interpretation. For some, it was the attempt to use scientific research to study magic. For others, it was wizardry or Houdini style magic shows. It was important for the team that the visual identity would convey the sense of wonder that the technology and data bring about.

We had to undergo quite a bit of back and forth to distil an interpretation of alchemy that for us had the right balance between the sense of wonder that we wanted to portray, and the science and data that creates it. We don’t claim to be performing magic, we claim to utilise technology and data to their maximum potential, to transform the office search process into an experience that is so easy and efficient that it feels like magic. It sounds like a simple formula, but conveying this visually was a real challenge.

We had dozens of attempts and the agency did a fantastic job coming up with different takes on what Office Search Alchemy could look like. They created a scale, called the Alchemeter (which I love), to try to pinpoint the perfect level of magic/alchemy. After viewing the first few concepts, we felt like we lost the scientific aspect, which was an important, integral element of the brand concept. And then we went totally the other way, and all the visual ideas were too formal.  Finally, we arrived at a visual identity that was a perfect balance of science and magic. 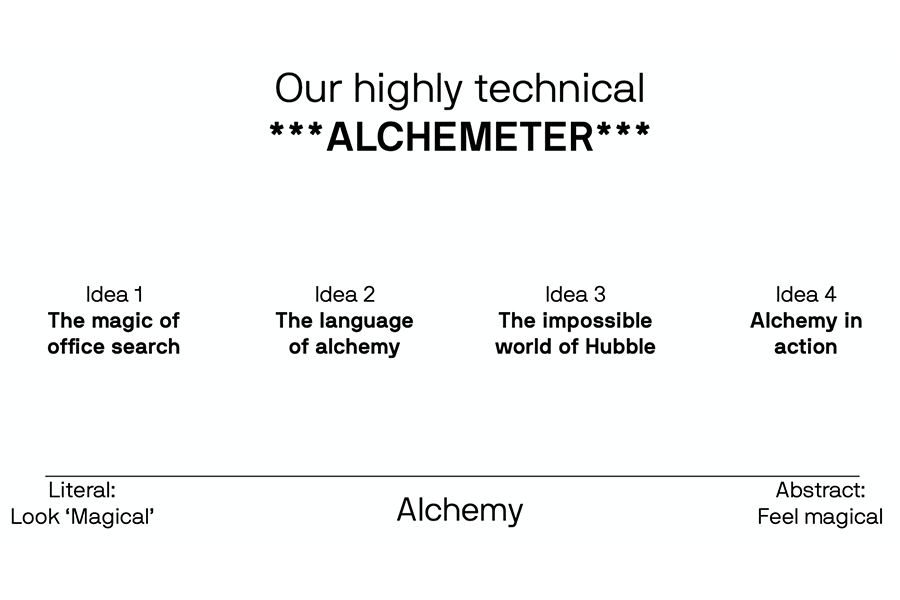 We’ve focused on an illustration-driven visual identity. These illustrations present a very modern-day figure, not someone that can be mistaken for a wizard or a witch. These figures represent our office alchemists. They develop and employ matching algorithms and mix millions of data points and property expertise to conjure the perfect office recommendations for clients. And, in addition to these illustrations, we were further inspired by the labs, chemistry processes, mixing liquids and potions aspects of alchemy. The new visual identity language was enhanced by shapes that look like a potion or chemical droplet. We call these shapes blobs. We tried not to, but this name kind of stuck. When you visit the rebranded site, you’ll notice these shapes, as well as the illustrations, which together bring the new brand identity to life. 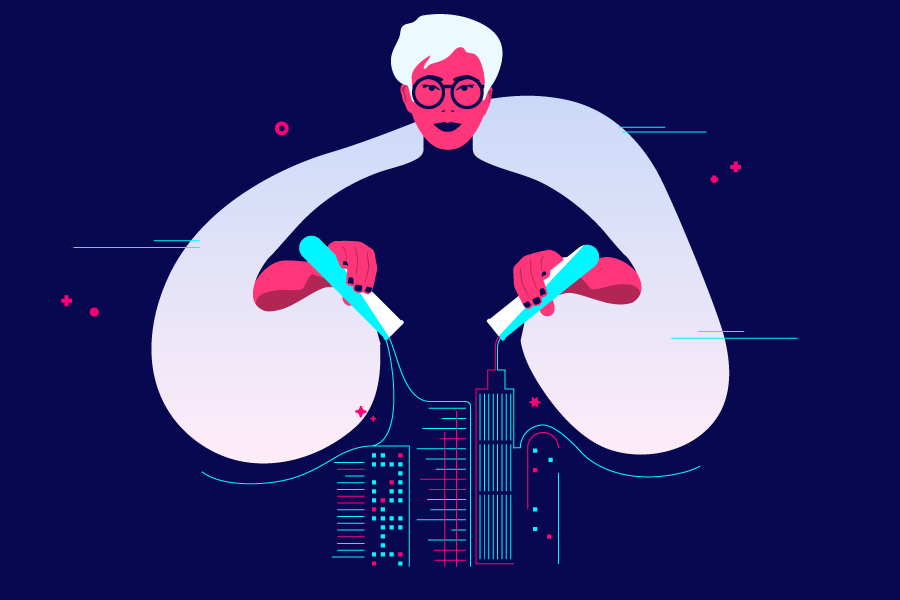 You mentioned that one of the major challenges was the visual identity. Were there any other roadblocks or notable challenges that you overcame?

Shachar: Yes, the visual identity for sure was the biggest roadblock. But then again, it’s one thing to have an official brand identity, and it’s another thing to then apply it across a living, breathing website. On the one hand, it needs to reflect the new brand, but on the other, it still has a very functional purpose servicing over 30,000 users every month. We wanted the brand to improve their experience, not distract or detract from it. Finding the right balance was a really difficult challenge for the tech team, but they did a fantastic job (and within an extremely short time frame)!

We also needed to translate the new brand concept into a single campaign message and design for our out-of-home campaign, which was another challenge. We had to decide on the exact messaging and imagery which would encompass a fairly complex concept. We wanted to ensure that the message would be enjoyed by and relatable to our target audience (the office managers/ops managers of London), and equally we wanted them to see value and gain benefit from this. There were lots of discussions about the copy, the visuals, and the story we wanted to portray in our initial campaign. So, this was an additional challenge. 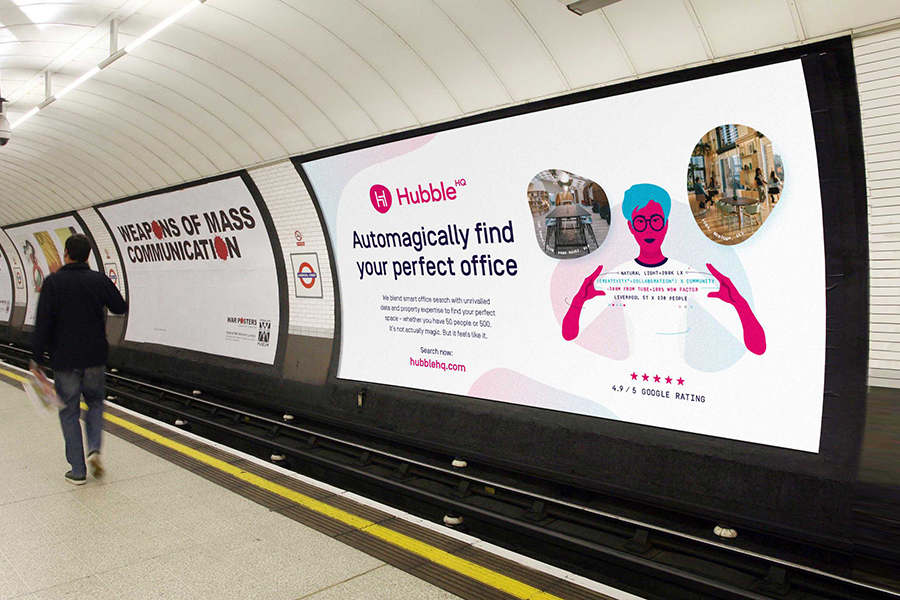 Have you seen Hubble Heidi on the tube? Tag us on Instagram @hubblehq and we’ll be sending the best entry some seriously slick new swag.

Having been through the process, what would be your biggest piece of advice to someone who’s about to undergo a rebrand themselves?

Shachar: Always speak to your customers. When you’re carrying out research, and you think you’ve spoken to enough users, speak to even more! I can’t stress this enough, I feel like it’s so easy to get sucked into the internal thought processes that prevail within your own company. In order to counter that, you need to listen to the voice of your target audience.

But perhaps my biggest piece of advice is this: find the right branding partner. We chose Onwards because they excel on both copywriting and design. It’s extremely rare to find that combination. We were very lucky to be working with them; they brought our identity, vision and culture to life in a single concept, and we are truly grateful for all their hard work.

How are you going to measure the success of the rebrand?

Shachar: We’ll be measuring the success of the campaign in a quantitative manner, both off and on platform. On the one hand, we’ll be conducting a traditional before-and-after market research survey. Essentially we’re going to be measuring aided and unaided brand awareness amongst a panel of our target audience. We’re also measuring the success based on actual performance on the site. One of the key metrics that we track is the number of office viewings booked on our platform. So we’ll be tracking those that have been generated either by someone typing our brand name into Google or by engaging with our brand on AdWords.

We will also do some user testing, to ensure that the new brand messaging is reflected clearly on the website—asking users that have engaged with our site to tell us what they believe the HubbleHQ brand stands for.

Finally, if the new brand was a famous person or a TV character who would it be?

Shachar: To me, Hubble’s Heidi is like a modern-day Mary Poppins. She makes things happen automagically. She tackles all sorts of mundane tasks that could be quite a hassle, but with the click of a finger (and a spoonful of data) she gets the job done.

It’s time to show that we really do practice what we preach. Automagically find your perfect office in the click of a finger—literally:

Search 1,000s of office and desk spaces across London and Manchester. Book your viewing now!

Our personal property advisor will manage your entire search for free