The Problem Isn’t The Office – It’s The Commute

Over the past few months, there’s been a lot of talk about the grand success of working from home during the pandemic.

Our own Should we ditch the office? Survey results confirmed it all—we found that 70% of respondents have had a positive experience of working from home so far, and that 86% of employees would like to continue working remotely at least once a week in the future.

But whilst the overall results showed some pretty compelling insights as to why employees have liked/disliked the whole remote-working experience, we knew that there was even more to uncover.

Last week, we investigated the impact that age has on working preferences, discovering that Gen Z are much more pro-office than Gen X and Baby Boomers.

This time, we’re looking at the link between commute time and enjoyment of working from home (WFH). 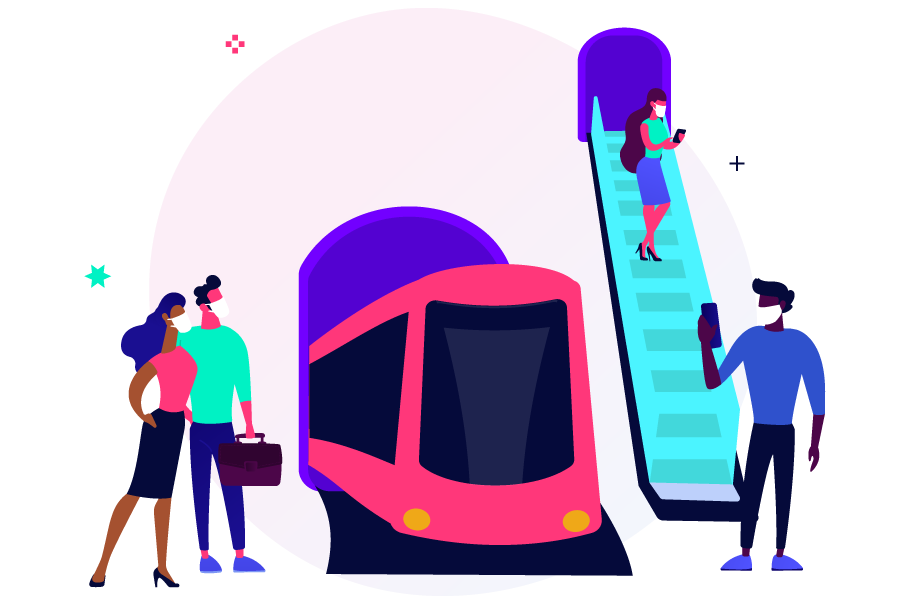 In the survey, a huge 79% of respondents named the lack of commute as one of the best things about WFH, making it the most popular response by far.

But that’s not all—we then broke down the data by respondents’ commute time (under 15 mins, 15-30 mins, 31-60 mins, 61-120 mins or 121+ mins) and actually found that there’s a direct correlation between employees’ commute time and their enjoyment of working from home.

Below we’ll dig into what exactly the data showed, and ways for businesses to use these findings to their advantage.

The link between commute time and enjoyment of WFH

One of our most striking findings was how directly the proportion of respondents who said they had had a positive experience of WFH increased as the length of the commute did. 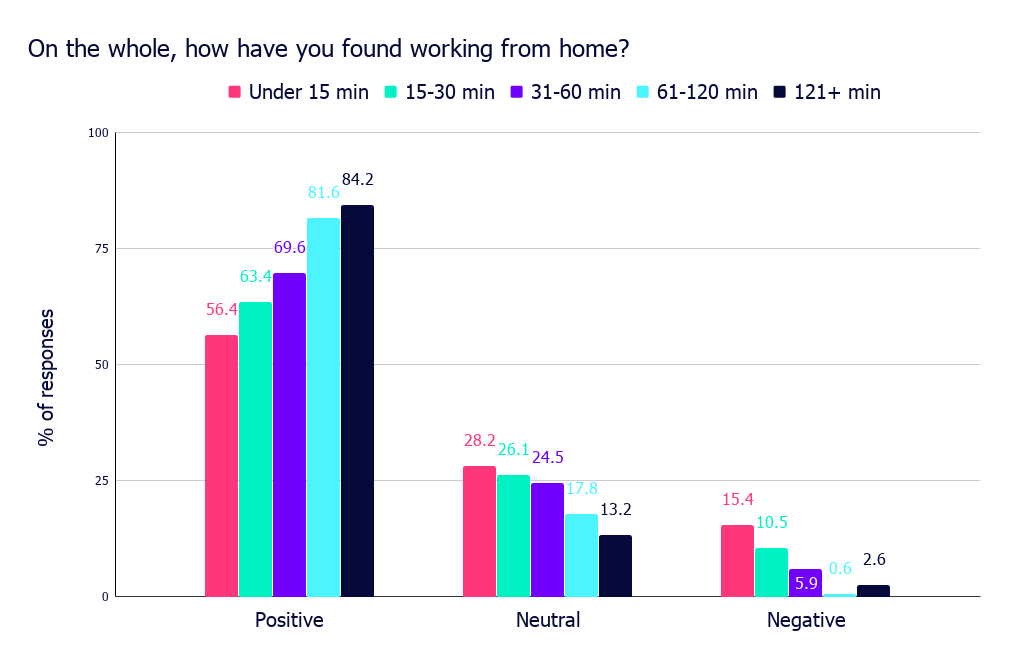 As such, people who live further from the office DO want to work remotely more often

With this in mind, it’s unsurprising that those who live furthest away from the office are those who want to work remotely the most frequently in the future. 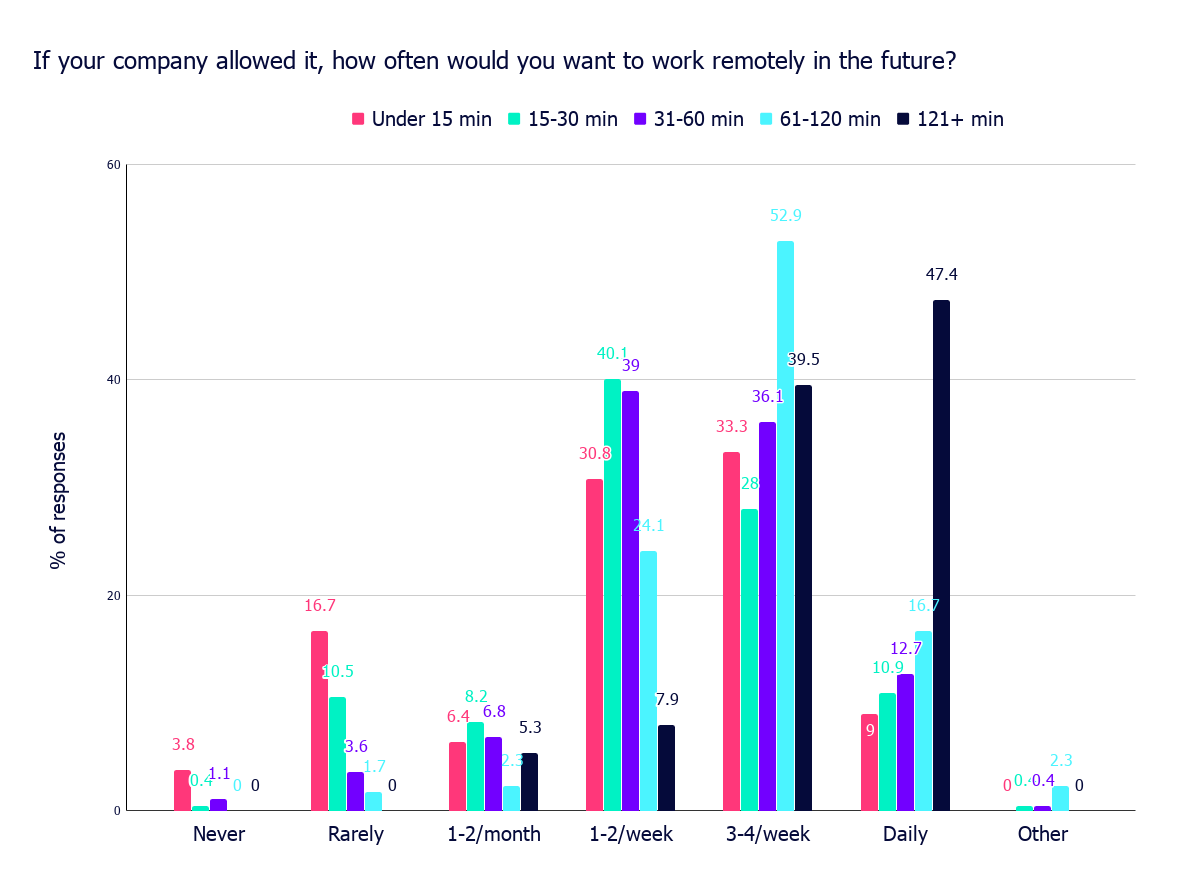 Across the board, we saw a big increase in the number of people looking to work remotely more regularly than they did before, regardless of their commute time. Even among those who live under 15 minutes from the office, 73.1% would now like to work remotely at least once a week, compared to the 35.8% who did so before.

Nevertheless, those with longer commute times certainly seem to want to work remotely the most often. In fact, 47% of respondents who live over 2 hours from the office would like to work remotely every single day.

Not only would those who have a longer commute like to use the office less frequently, but they are also less likely to think that their company should have an office at all. 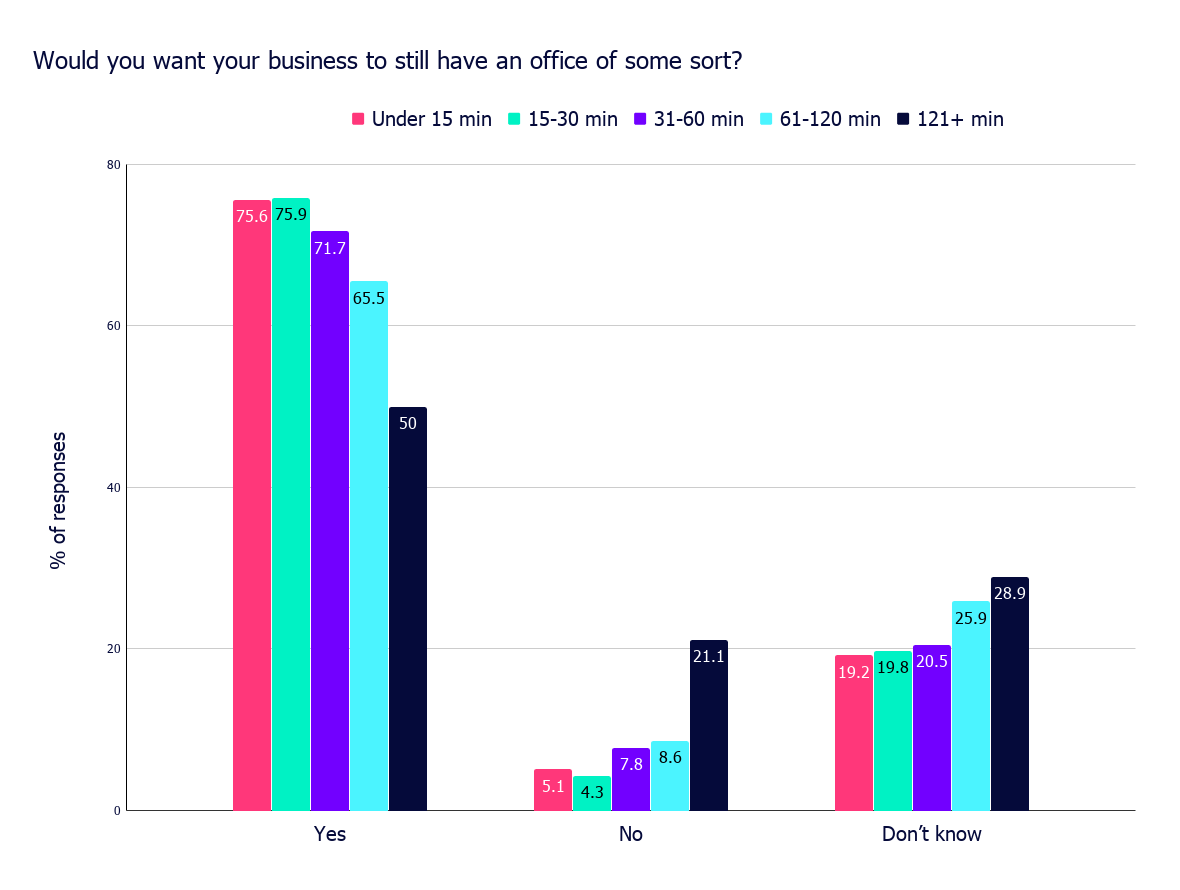 Though many people are not yet decided, 21% of those who live more than 2 hours from HQ would not want their company to have an office of some sort, a significantly higher figure than any of the other groups.

Employees really appreciate the gains in time, money, and flexibility that come with not commuting

So, what is it that we dislike so much about the commute?

Covid is a concern for sure—according to Transport Focus, 3 in 10 workers “do not feel safe on public transport at the moment”, meaning that one of the main challenges over the coming months may be convincing office-goers that it is safe to travel.

However, the positives of not having to commute every day are so impactful on employees’ lives that even when coronavirus no longer poses a threat, we may not necessarily see everyone flood back to the roads and rails during rush hour.

A huge number of respondents in the survey cited the time that they’ve now reclaimed by not spending hours commuting each day, and the flexibility and freedom that this now gives them. 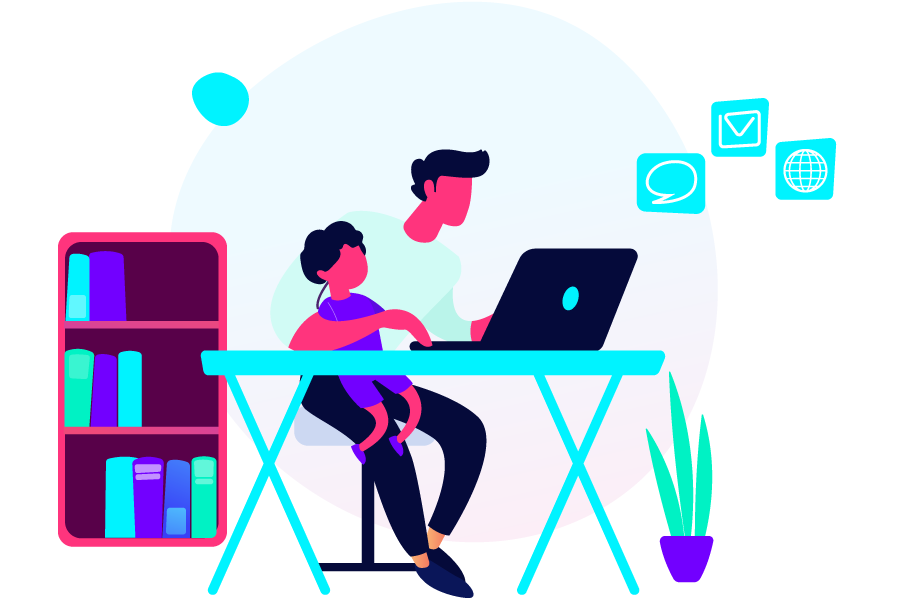 It’s also worth mentioning that in the survey, 55% of respondents said that “financial savings” were one of the top 3 things about working from home. Given that a recent study by Totaljobs found that not commuting could save Londoners up to £14,000 over the course of their careers, it’s fair to say that travel costs factor highly in these savings.

Here’s a selection of comments from respondents on what they’ve enjoyed about not having to commute:

“Really enjoying WFH, no commute means more personal time, and actually more time spent on work than when commuting to the office”

“The commute is so much better when working from home, and I value the extra time I’ve gained.”

“The worst part of working in an office is the commute. If I could cut this out, it would save me so much time and money, and I think it would have a direct impact on the quality and quantity of work that I produce. I realise it’s important to meet colleagues in person, but I personally would love a set-up that splits home-working and office-working (i.e two days at the office, three from home).”

We also found that a number of respondents would be keen to take the world’s new, remote-friendly attitudes as an opportunity to move further out of the city (most of our respondents were based in London)—citing reasons such as lowers costs, impact on health, and improved quality of life outside the Big Smoke:

“If [my company] went fully remote…I could move out of London and buy a house. It’ll be a great way to hire and retain talent moving forward.”

“[I’d like to work] without the commute, in a healthy environment, close to the country”

Then again, some people actually miss the commute

At the other end of the scale, it’s worth mentioning that there were respondents in our survey who said that they actually miss the commute.

Indeed, this survey by the University of Cambridge discusses the benefits of commuting—namely in the way that it enables work-life separation, and provides us with a way to clearly demarcate our professional and personal lives.

Some are also feeling the impact of working from home on their physical health—without the journey to and from work each day, those with office jobs are finding themselves moving around significantly less.

Partly because of this lack of work-life separation that comes with working from home, but also because many don’t live in home environments that are conducive to work, we’ve seen a big increase in demand for workspace closer to employees’ homes.

In the survey, we asked respondents how often they would want to use a coworking space that wasn’t their main office. This is how they responded: 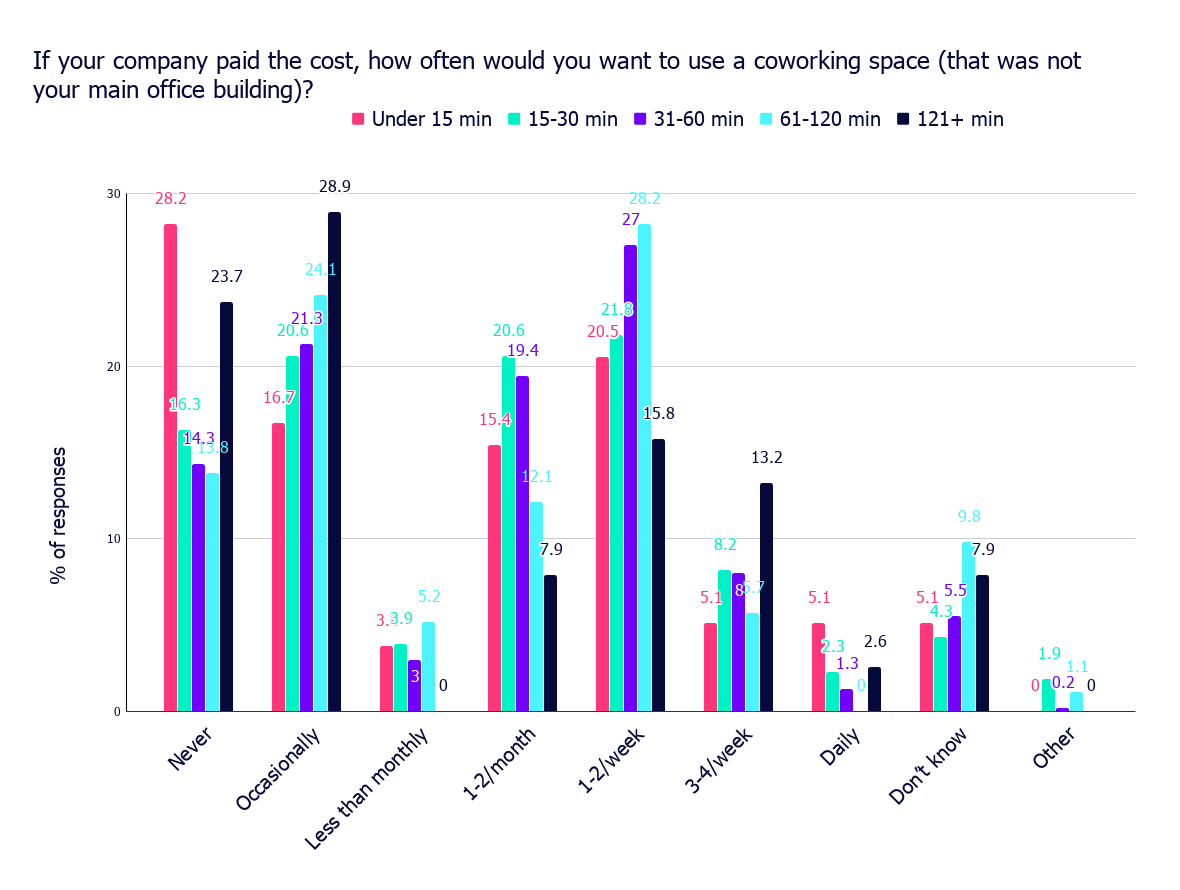 Whilst the exact figures vary from group to group, it’s clear to see that people don’t necessarily want to always work from home, but would like access to external workspace closer to where they live, as well.

The most popular response among those who live under 15 mins from the office was “never”—presumably because the main office is already a workspace close to home.

With all of the above in mind, many employers are now looking for ways to give their employees access to workspace closer to home, rather than expecting them to commute to a central HQ every day.

A number of London’s most popular office providers are making this easy, by giving business tenants access to any of the workspaces in their portfolios.

In this article, we’ve listed the office providers who offer this. Some also have sites elsewhere in the UK, and even around the world—ideal if you have a distributed workforce.

Find out how your team want to work in the future

Over the past couple of months, we’ve been creating FREE tailored reports (like this one) for companies looking to find out how their employees want to work in the future.

To get one for your company, all you have to do is circulate this survey link amongst your team, then email futureofwork@hubblehq.com stating your name, company, role, and company size. And that’s it! We’ll then create the report for you, complete with personalised recommendations.