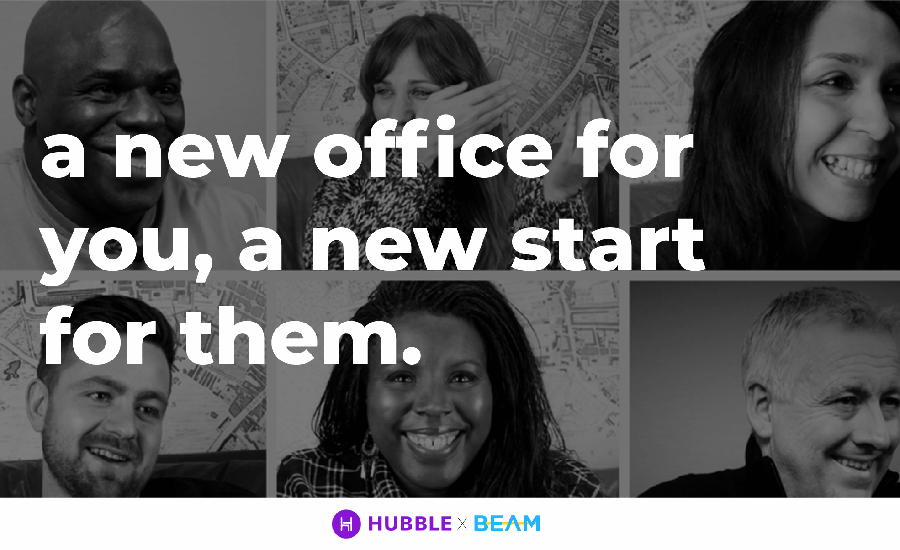 Homelessness is one of the UK’s biggest social issues, with thousands of people sleeping rough every single night. That’s why, this December, Hubble is partnering with Beam to help homeless people back into stable work.

According to an extensive review conducted at the end of last year, there are more than 300,000 homeless people in Britain right now. That’s the equivalent of the whole population of Nottingham, or Cardiff, or Belfast.

Addressing such a widespread issue is no easy task, and all too often, measures taken only mask problems rather than solve them. What is needed are sustainable solutions that tackle the fundamental reasons behind why people are on the streets, supporting them to change their lives for the long run.

That’s where Beam comes in. Beam is the world’s first crowdfunding platform to help homeless people train up and get into work. With the support of charities and caseworkers – and of course, the public – Beam ‘members’ raise money for training courses through online campaigns that help them pursue the career of their choice, whether that be as an accountant, a beautician, or a crane rigger.

At Hubble, we love what Beam are doing, and want to support them in their efforts. This December, Hubble will donate to Beam every time someone takes an office with us. That money will contribute to training for a homeless person, helping them into stable work and off the streets for good. Start your search here to help us support their cause:

Want to know more about Beam? We spoke to Alex, Founder & CEO, all about their concept: how it works, where the idea came from, and their story so far. 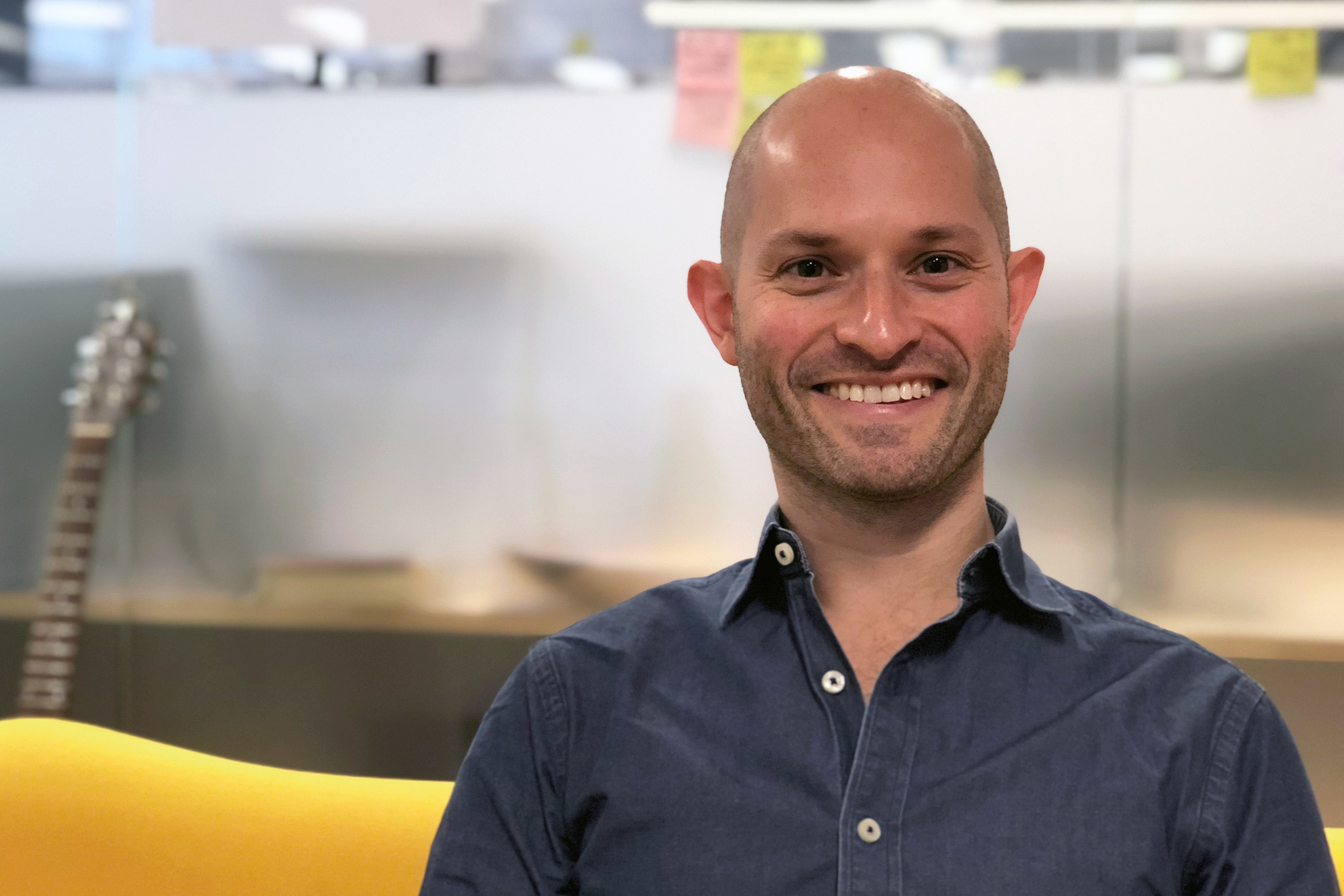 Hi Alex! Thanks for taking the time to chat. First up, can you explain how Beam works?

Beam is a completely new way to help homeless people long term, and it works by crowdfunding employment training. But we don’t just raise the funds for them to do all kinds of different things – whether that’s becoming a bricklayer or an accountant – we also support them on that journey through training and into work.

There are five key steps to the process. First, charities such as St Mungo’s and Thames Reach recommend individuals to the platform. We then build a personalised employment plan for them that sits on their profile page, along with a budget that breaks the costs of the campaign down to the nearest pound. Then, lovely people out there come and fund the campaigns; they can either fund a specific one or split their donation between all of those that are live. A caseworker at Beam then supports them on their journey.

Finally, once the member is settled in stable work, they can choose to pay forward the amount of their campaign to future members – by setting up a small monthly donation like anyone else, they effectively become the patron of a new generation of Beam members. This is entirely optional, but thus far, every funded member has chosen to take this path.

I think there are two main reasons why this is working so well. The first is the financial side – crowdfunding is able to remove the financial barriers preventing people from getting back into work. That means not only the training itself, but also any other obstacles like the costs of travel, buying tools, or even childcare. The latter is very important for single mums, who are actually the largest single homeless group in the UK. 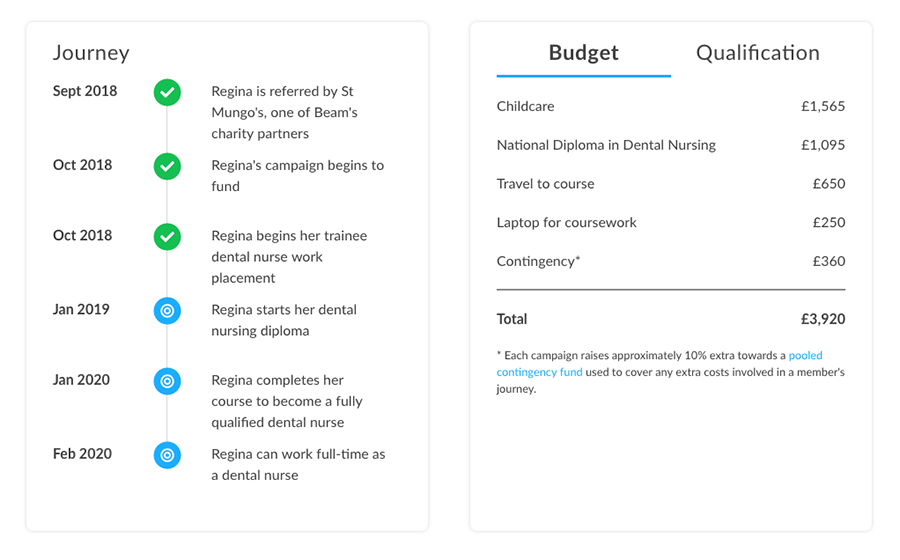 But almost even more powerful is the non-financial side: the support networks and confidence that each member gains through crowdfunding. Funders of each campaign are able to wish the members well, and campaigns have hundreds of positive messages.

This is really powerful, because experiencing homelessness for years can really destroy both your self-confidence and self-belief – and those things are huge barriers to getting and staying in a job. It’s really important that we don’t just give our members a boost in their practical skills; we also give them a personal, psychological boost. I believe that when both of these things come together, we have a 1+1=3 type model.

How did it all start?

My background is in technology, so I already had that skillset and had always wondered whether I could use it for social impact. But really, it all started when I met a homeless man at my local tube station. I got to know him, bought him some coffees, some socks when it was getting cold. One time he disappeared for a few weeks. When he reappeared, he looked completely different – his beard had been shaven, and he looked at least five years older.

He told me he’d had a heart attack and had just been discharged that week – already he was already back out on the street, bouncing between there and hostels. It occurred to me that, as nice as my gestures were, they had completely failed to lead to any improvement in his situation – they were just sticking plasters. I began to ask myself how I could have made a lasting difference to this man’s life.

For me, it was always going to be skills and training that allowed this individual to sustainably support himself, and not be reliant on Alex or other people for socks, coffees, and a thousand other things. Of course, skills and training cost a lot more than coffees. But what if everyone chipped in?

In my last business, we held the largest ever crowdfunding round for a startup, so it was a pretty instinctive to use the same method. I tested the idea with charities and people thought it was interesting – it hadn’t been done anywhere in the world yet, so we said “Okay! Let’s launch it right here in London.”

Our first member was a guy called Tony, who was living in a homeless hostel in South London. He wanted to be an electrician but couldn’t afford the training and had hit a wall. When I told him he could be the first person on the platform he was evidently very nervous, and only had one thing to ask: why would anyone actually help him? I told him that I thought they would because they care. He wasn’t convinced, but we gave it a go. It turns out people do care and before we know it, he’s one of the main stories on Sky and BBC News. He’s got a big splash on Time Out, Reuters, Evening Standard, Vanessa Feltz, LBC…

Five months down the line, he qualified and made it into stable work as an electrician. Now for the first time in twenty-odd years, he’s in employment, and about to move into his own place for the first time in two decades. The model is working incredibly well. More than 90% of our members are now in at work, even though some have been entirely out of work for their whole adult lives.

What kind of training is available on Beam?

The journey is an employment plan built around everyone’s individual strengths, talents, and ambitions. Everyone is different, so of course their journeys are different, too. People can become bricklayers, teaching assistants, accountants, electricians, beauticians…amongst many other things.

From our side, it’s important that there’s a level of pragmatism – but actually our members are really pragmatic themselves. If anything, there’s tendency for people who’ve experienced homelessness to underestimate their abilities and potential, due to a common lack of confidence. We end up with people like Davina, a woman who has had a very difficult period. She’s now coming top of her class in her accountancy exams.

Unfortunately, many people would say that a young woman living in a homeless hostel who hasn’t been through higher education is crazy, that she could never become an accountant – and she’s becoming an accountant.

How can people donate?

Head to the Beam website and there you can donate in a few different ways. You can either donate specifically to an individual or opt to divide your donation between all of the live campaigns. You can also choose to do it on a one-off or on a monthly basis.

For us at Beam of course, we’re really keen that people will support us with a regular donation, even if it’s just a few pounds a month. It allows us to grow the community in a more predictable way, help as many people as possible, and be more confident around how they’re going to be funded.

Well! I was looking for a word that combines both positivity and support. There’s a beam in my flat, and I remember walking around one time, thinking “I’m never going to come up with this word. It’s impossible. It just doesn’t exist.” I was actually banging my head against the thing, when I must have moved my brain around (!). I opened my eyes and the answer was literally an inch away from me.

People also used to ask us if Beam stood for anything. Then, one time we had a meeting where we got this question again, and our Head of Engineering, Julian Keenaghan, came up with the idea that it stands for “Be Amazing”. It works, because Beam is all about people living up to their full potential – not only the people on the platform, but also the public as well.

We all have so much potential to help our fellow citizens much more than we do, and what we’re doing here with technology is giving people a tool so they can do that really easily. Everyone has a thousand things going on in their lives, and it’s the job of technology to make the things that people aspire to do much simpler. What Beam is doing is connecting people who need support with those that want to help them, in a way that is safe, scalable, and can help a lot of people.

Want to do your bit to help Beam? Finding your new office through Hubble could help fund a member’s accountancy training, childcare costs, or new work uniform – so you can find your ideal place to work whilst helping them find theirs, too.