Where is the best broadband for your London workspace?

As a business, your employees should never have to experience buffer face, but sometimes your internet connection simply does not live up to expectations. Savoy Stewart analysed the broadband speeds of well-known postcodes around the capital to find out which part of London could stream the best bandwidths. Broadband is an essential factor for the high-speed institutions and start-ups of today’s London office market.

So if you are a business owner and are not sure where next to base your office in London’s many thriving locations, knowing where you will get the highest internet speeds for your business needs is a great start.

Among many other things, one of the most commonly asked questions when people are searching for office space is “what’s the Wi-Fi like?”. Now, thanks to this data, people can find out.

Many broadband providers claim huge broadband speeds, but the advertised figures are usually the highest speeds achievable “up to” a certain level. But, too often providers rarely deliver on their promise. Uswitch data from the last six months was used to analyse the broadband speeds tested in 25 different areas, across 5 locations in each part of London; north, east, south, west and central. It was found the average download speed in London is 18mbps and an average 4.8mbps upload speed. 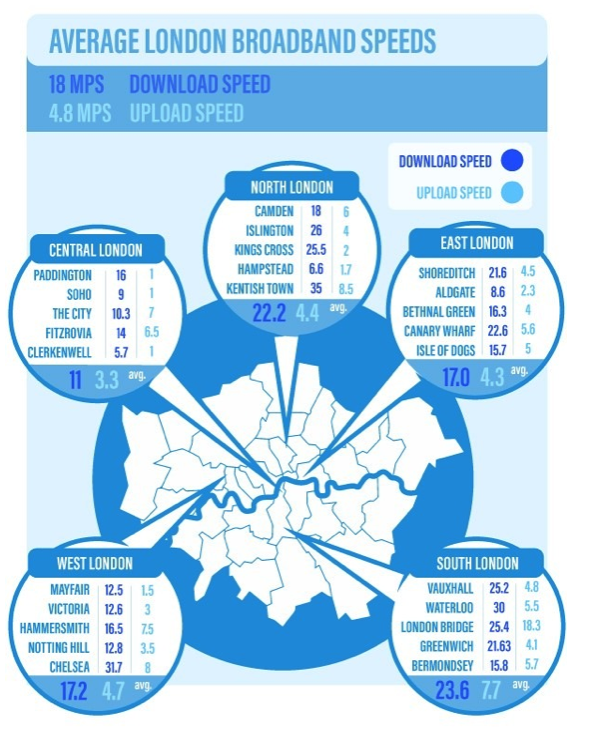 It might be a common misconception that broadband speed is better at inner city locations. As analysis showed that Central London had the lowest average download and upload speed in the whole of London. The locations tested were Soho, Paddington, Fitzrovia, Clerkenwell and the City. As the City is so often associated with being the fast-moving hub of the financial industries (home to the LSE, one of the speediest markets in the world) you may have expected much higher internet speeds, but surprisingly they are very low in comparison to locations further from the centre. For example the BT Tower, an icon of telecommunications excellence, is located in Fitzrovia, yet the speeds achieved here are below average at 14mbps download speed. Clerkenwell is an area located in the borough of Islington at the centre of London, but its central location does it no favours in terms of broadband speed. Clocking the lowest speeds out of all places tested in London at 5.7mbps avg. download speed and 1mbps avg. upload speed, Clerkenwell is the worst area on average for broadband speed in London.

The top 5 areas with the highest average download speeds in London were:

The top 5 areas with the lowest average download speeds in London were:

The fastest internet speed in London

The SE5 postcode recorded one of the highest download speeds in London with 185.1mbps near Oval Station in Vauxhall, South London. Virgin Media are the provider for this location, and consistently delivered high broadband speeds in most areas across London. Virgin Media also run their own independent network, whereas the rest of the providers use BTs network which could be why Virgin can offer higher speeds.

Mayfair is one of the most expensive areas in terms of office space rental in London at £146 price per sq ft per year, yet the broadband speeds there are pretty low at 12.5mbps for downloads. In contrast, office space rental in Waterloo is almost two thirds cheaper on average at £68 per sq ft per year, and with a much faster average download speed of 30mbps, you get a lot more megabytes and space for your money.

Another area where you can get good value for money is Kensington and Chelsea which costs roughly £88 per sq ft per year for rented office space, and is also one of the best locations in the capital for broadband speed. It is also the second best location in London with a broadband download speed of 31.7mbps and an upload of 8mbps.

A high broadband download speed is essential for any modern office. And with more employees and more users on the service, your office broadband needs will increase. BT offer individual business broadband packages which start at £10 per month for up to 17mbps download speed and 1mbps upload speed. And the budget increases for higher capacities like 38mbps, 76mbps and the most expensive option at £152 per month for a leased line which they claim can deliver up to 10gbps. Understanding which capacity you need is difficult, but more is better and if you are looking at where to base your next office, perhaps you should consider locations outside the City like Kentish Town, Chelsea or even Waterloo.