The History of the Office: Office Trends Through the Centuries

A note from Hubble

Since relaunching as the world’s first hybrid workplace platform, Hubble’s helped businesses of all sizes figure out what to do with their office space.

We’ve built three flagship products; the Workplace Strategy Tool, Hubble HQ and the Hubble Pass, which empower businesses to find their ideal blend of working from the HQ, home or on-demand workspaces.

For more information on how Hubble can help you establish your future workplace strategy, click the link below:

Many of us spend more time at an office than ever before, seeing more of our bosses and colleagues than we do of our families. The office is our second home, and its structure and design can have very real consequences for our productivity, happiness and wellbeing. That’s why great office design is so important.

Take a look at recent office history and you’ll see a natural evolution in design that mirrors changes in more ways than just our working processes; there’s changes in our culture, economic growth, technology and fashion too. 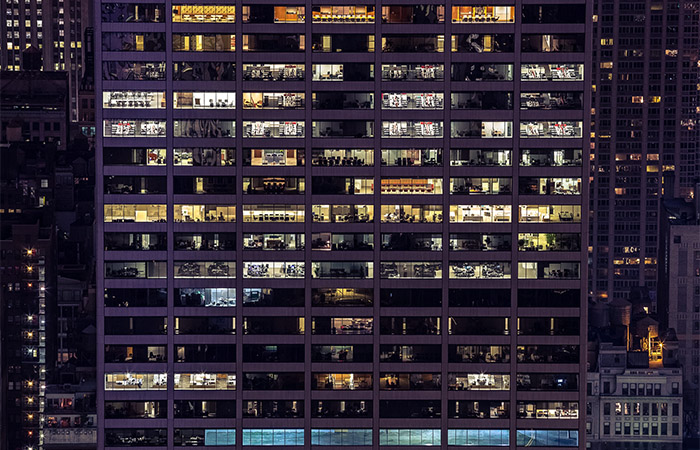 Over time, the emphasis of office design has shifted away from mere worker productivity. Employee health, happiness, creativity and stress levels have become real concerns for employers, interior designers and architects. The result has led to dramatic changes in the shape, purpose and design of workplaces over the years.

How did we get here, to the de rigeur open plan spaces of today? And what can we expect the offices of the future to look like? We take a look at the history of the office – and where office design is headed.

All roads lead to Rome…

Not content with inventing roads, concrete, aqueducts, newspapers, sewers and sanitation for us, the Romans also left us the legacy of the office. Ancient Rome had its very own business district, and with such a vast empire to control, order and organisation were key.

At the heart of each Roman town lay its forum, a large square, bounded by shops, offices and government offices. It’s the Roman Latin ‘officium’, term loosely meaning ‘bureau,’ that gives us the word we use today. 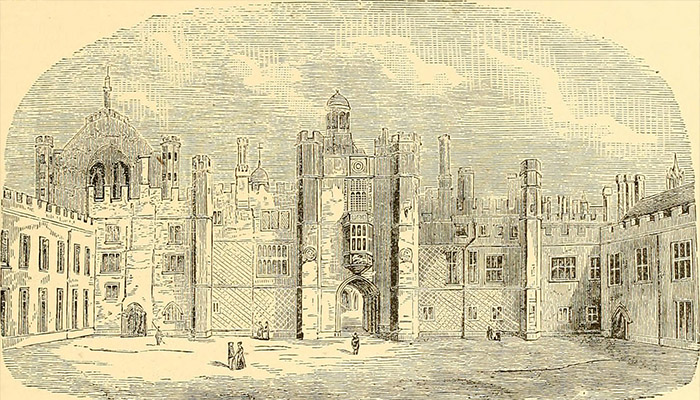 Think working from home is a modern luxury? Think again. Following the collapse of the Roman Empire, dedicated office spaces would fall by the wayside until the 18th century. Most ‘office’ work was carried out at home, with many shop owners living above their stores and employing clerks who lived there too to help with the accounts, paperwork and daily domestic tasks. The advantages and disadvantages of working from home then were the same as now – there was no commute, but there was also no escape.

The 18th century sees the construction of two of the first dedicated office buildings in Britain.

Now known as the Ripley Building, after its architect Thomas Ripley, was built in 1726. The first purpose-built office building in Great Britain, this commanding u-shaped structure in Whitehall still impresses. Built for the Royal Navy, and multipurpose, it contained the Admiralty board room, which is still used by the Admiralty, state rooms, offices and apartments for the Lords of the Admiralty. It’s now occupied by the Department for International Development.

1729 saw the opening of the country’s second purpose-built office building, which was every bit as imposing as the first. On Leadenhall Street, it housed the East India Company, which needed a headquarters for thousands of staff employed to handle the large and complex bureaucracy it encountered in its long-distance trading with India and Asia.

Author Charles Lamb who worked as a clerk at the East India Company has given us an idea of what office life was like there through his diaries – and it bears some remarkable similarities to office life today.

Employers would grant perks like holidays and bonuses, only to take them away when times got hard. Employees would play practical jokes and pretend to work when actually reading the newspaper – there was a definite sense of camaraderie and friendships were made. However, he also wrote,

“You don’t know how wearisome it is to breathe the air of four pent walls without relief day after day.”

He leaves us a lot of evidence of work-related stress, tales of depressed co-workers, drudgery – even suicide. It was time for change.

Love it or hate it, we can thank architect Frank Lloyd Wright for introducing the open plan office space to the world – a layout that has largely dominated our office history.

Early Open Plan offices followed the principles of Taylorism, rooted in the work of industrial engineers and efficiency experts like Frederick Taylor.

Electric lighting, the telegraph, telephone, typewriters, calculators – work and communication processes were changing. Land prices were increasing, but with the invention of steel frame construction and lifts, buildings could scale more than 10 storeys for the first time. Skyscrapers would sweep the land, allowing vast workforces to inhabit ever smaller square feet of increasingly expensive land.

The office set up at this time was incredibly regimented, with workers sat at endless rows of desks and managers in surrounding offices looking in. Air conditioning and fluorescent lighting meant that new high rise buildings had little need for natural light and ventilation, and would increasingly cut workers off entirely from the outside world. The results could be dehumanising and depressing.

The regimented approach was thrown out the window in Europe in the 1960s with the development of Bürolandschaft – office landscaping. Here staff would sit in more organic patterns, loosely dividing areas with the use of plants and furniture, to allow easier interaction between teams. 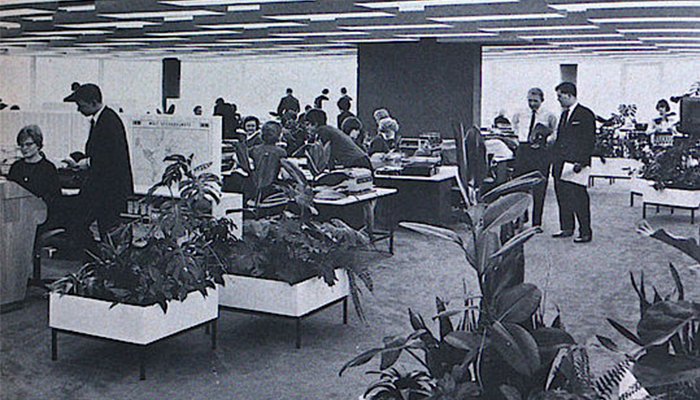 A new ‘socially democratic’ workplace was on the rise, thanks to the likes of Germany, the Netherlands and Scandinavia having more authoritative workers’ councils fighting for better, healthier working conditions for their employees.

The freewheeling open plan layouts of Bürolandschaft weren’t for everyone. Some workers needed more privacy. The Action Office line was one of the first modular office furniture collections, still in use today. It introduced the concept of flexible, semi-enclosed workspaces. It allowed office spaces to be personalised and frequently modified to suit the needs of the company and its workers.

In the 1980s, cheap and effective modular walls led to a sea of cubicles springing up in offices all over the globe. Cubicles arrived as economic growth created a swell in the number of middle managers. These were workers too important to be given just a desk, but not important enough to be given their own office or window seat.

As technology advanced, workers became more mobile. Laptops, mobile phones, WiFi – no need for cables, no need to be tied down. Open plan was back, allowing workers to break out of the isolation of cubicles and interact and collaborate more freely in the workplace. Hot desking and co-working are the buzzwords today, as an increase in the number of freelancers sees an increase in demand for part-time, flexible office space and creative collaboration.

Company culture, employee well-being and technology will all affect the way our workplaces change in future. Some office trends to watch out for include:

Co-working spaces look set to remain at the heart of office design for some time, simply because they are performing so well – a recent report from the Harvard Business Review shows that co-workers are thriving in these spaces, they are cheaper for companies to set up, and demand looks set to grow as the number of freelance workers continues to rise.

Integrated technology will allow offices to keep their costs down, with automated lighting, window shading and heating fully-programmable and controllable remotely via a smartphone. High-tech conference rooms means less need for travel and more virtual meeting spaces. And for hot deskers, apps have already been developed to let you find available working spaces nearby, arranged by variables like light, ambient noise and the number of people around. 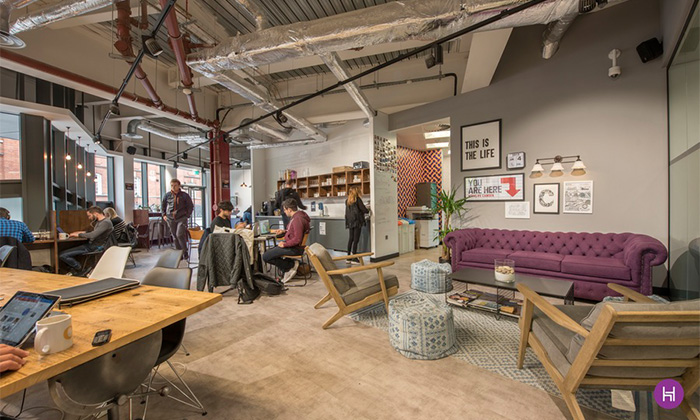 As more and more freelancers find working from home isolating, offices will seek to create social, professional and creative spaces for increasingly mobile and flexible staff. An increase in worktivity areas, designed for socialising, play, exercise and eating, will seek to keep workers happier and healthier than they would be at home. Just take a look at Google’s new Googleplex, with its indoor cycling and running tracks to get an idea of what’s in store.

The office is a fluid space greatly influenced by the requirements, values, technology and culture of the time. The office as we know it was ‘invented’ to solve a problem: the need to host a large amount of people and enable easy communication as well as ensure proximity to important documentation. Today such needs are becoming less relevant with cloud based hosting and conference calls. In our times the focus is very different: to create a space where people feel inspired, motivated and happy, so that employees produce the best work possible. It can be said with certainty that office design doesn’t happen ‘by chance’. Research into work-psychology, developments in technology and other cultural factors have given shape to the office you’re sitting in now, and it will continue evolving.