All Make Believe x HubbleHQ: How Working in WeWork Can Catapult Your Business 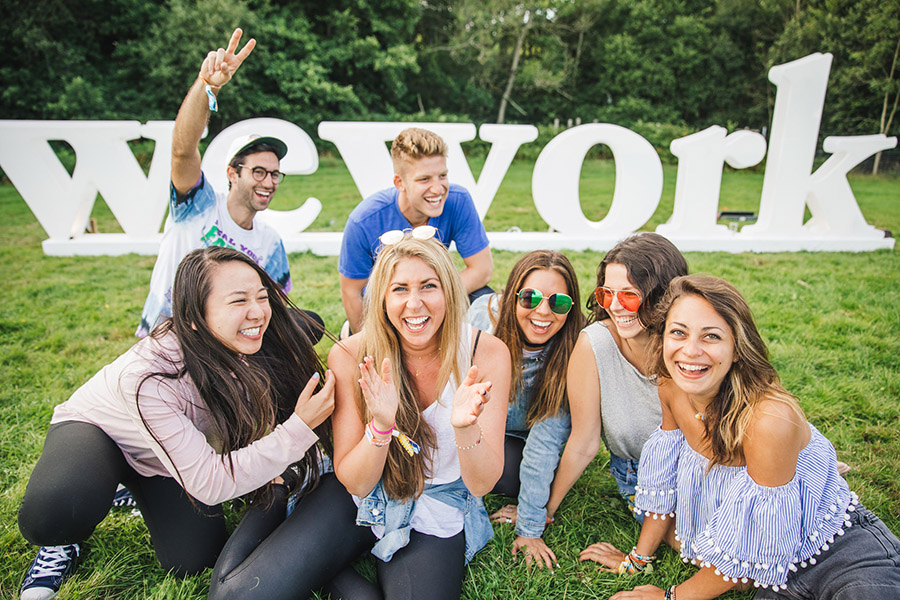 WeWork, the office space community of creators, are coming to the UK, opening their first office in London Southbank this autumn. With 20+ locations and 20,000+ members worldwide, they’re creating a buzz – but what’s all the fuss about?

Having been a WeWork member in New York since September 2012 and first members in the Broadway ‘Labs’ Location when it opened, Pierre Wooldridge knows WeWork membership inside out. So we jumped at the chance to quiz him on what it’s really like to work at WeWork!

Pierre is a UX / UI Designer and the founder of mobile application and web design boutique AllMakeBelieve LLC. They develop beautiful iPhone apps with a strong emphasis on usability, with their latest release “Forks Over Knives – The Recipes”, a mobile recipe app featured as Best New App in the Apple App Store, spending two weeks at #1 in the Food and Drink category. Pierre also recently consulted on UX / UI design for FLY, a video-editing app featured as ‘Best New App’ by Apple in over 120 countries.

Save 5% off of your contract when you book space at WeWork through HubbleHQ!

What first attracted you to WeWork?

The emphasis on community. I really dig the open-plan ‘Labs’ offices they have, which makes it incredibly easy to collaborate. I also love the amount of effort the Community Managers put into running events that are geared to bring people together.

There seems to be something happening all the time – whether it’s a happy hour, pitch contest, a lunch-and-learn (where a sponsor brings lunch and tells you about their product or service). And very often there’s something plainly fun like a scavenger hunt which is a great way to loosen everyone up. I’ve visited a lot of other co-working spaces and they just lack the soul that WeWork has.

I haven’t even mentioned Summer Camp – which is just crazy. They take 800 entrepreneurs to a boy & girls camp in the Adirondacks (around 6 hours north of New York) for a long weekend which is chock full of activities. Rope climbing, sailing, presentations, workshops and all with an endless supply of alcohol & live music. It’s like an entrepreneur’s music festival and an opportunity to meet peers in my industry on a personal level, unlike anything I’ve experienced before.

What’s the one thing that makes WeWork different?

This is a tough call. There are too many of them! Summer camp is one. The breathtaking design of the locations is another – when you see the expressions on the faces of people when they first walk into a WeWork office – it’s quite something. The endless kegs of beer on every floor are also great. But I think the community managers get my vote. We Work puts a lot of time into hiring the best people, and the community managers are an incredible bunch. They always go out of their way to make sure as a member you’re taken care of – or connected with anyone you want to be.

What does the WeWork community mean to you?

I think in some way the WeWork community is involved with every part of my business. My team of developers came through a friend I know at WeWork. A good number of my clients (big and small) have also in some way been related to contact at WeWork. This actually all came about when I started to run a user testing event there (called The Test Tube) – where we bring together 20 companies each month to give and get feedback on each other’s ideas. Now I have more leads than I know what to do with… but I’m always keen to have more!

How do you take brain breaks in the office?

We eat lunch together, shoot aliens together (they have arcade machines here on our floor too). It’s also insanely easy to find someone to hang out or chat with after work as people tend to congregate around the beer kegs in the evening – or an event will be on.

Why should a Londoner consider WeWork?

It’s an experience unlike any I’ve seen before, particularly in the UK. The WeWork offices just add such a sense or professionalism to any business.

You’ll instantly tap into a community of friends you didn’t know you had, and potential clients just within the WeWork sphere.

WeWork (through the community but also the staff) can open up connections to all sorts of people you’d otherwise never get to meet. Whether it’s investors, evangelists, or just people who will pay for your product – it’s an entire bustling ecosystem all within one place.

Ah, that’s tough! Rather than one tune – I’ll recommend a site that sends me a playlist full of phenomenal music every week: noonpacific.com. Enjoy!

Interested in learning more about WeWork or moving in yourself?  Get 5% off your entire contract when you book through HubbleHQ!