From Hampers & Hot Desks to Hybrid Working: How Feedr Figured Out Their Future Workplace Strategy

The debate around the ‘future of work’ is still very much alive. In one corner, analysts are predicting the return of the five-day office week. But in the other, we’ve got Apple employees taking a stance against CEO Tim Cook’s 3-days-in-the-office order. As predicted—there’s still no sign of a “one-size-fits-all” solution.

And that’s a good thing. At Hubble, we believe there’s real power in companies devising bespoke back-to-work strategies that place their employees at the heart of it. It’s the teams who have lived and breathed your business, so listening to them—as opposed to the media noise—is crucial in establishing a future workplace strategy.

And that’s why we spoke to Feedr—the enterprise health platform that promotes healthy eating and better nutrition while you’re at work. Feedr has decided to adopt the hybrid approach, with flexibility, in-person interaction, and company culture being the main drivers.

But we think all companies, from startups to business giants, should definitely take a leaf out of Feedr’s book. Their leadership teams always took employee sentiments into account and continue to use them to guide the decision-making process.

So, we were incredibly excited to speak with Annie Butt, the company’s People, Talent and Office Manager, who revealed how Feedr gathers employee insights on everything from how to repurpose office space to team socials.

Hey, Annie! Thanks for chatting with us. First up, it would be great if you could give us a quick introduction on yourself, your role and what Feedr is all about.

Annie: Sure! I’m the People, Talent and Office Manager at Feedr. We’re an enterprise health platform that allows employees to access healthy food and better nutrition while they’re at work. It’s heavily focused on employee wellbeing and encouraging healthier lifestyles—especially when you’re stuck in the office, and your local Pret’s just around the corner. Feedr aims to fill that gap for people.

My role is pretty varied—from HR responsibilities to employee wellbeing. I joined the company in September 2020, and during that time, there was a massive period of growth. So, I managed a lot of recruitment and onboarding—while also ensuring that people are comfortable and ready to work from their homes.

Pre-Covid, what was Feedr’s relationship like with the office? And how have you been operating in the last 12-months?

Annie: When I joined the team, Feedr had an office in a WeWork. This had been their base for the previous year, so it was very much an office-based team. Everyone would come in, spend their time in the office and then work from home very occasionally, as I think most companies did.

And then the pandemic hit. We kept the WeWork office as somewhere for people to use if they were struggling to work from home—and I think it was crucial to have that balance. So, the office was still very much open, but we implemented a rota to try and limit the number of people going in.

Once the second national lockdown hit in November, we moved out of our office and started using WeWork All Access, so that our team could hot desk around London if they wanted. Again, it was really important to have that balance. But we didn’t have a base—which was fine for that period of time where people were very much cocooned back in their homes again and wanting to stay at home because it felt a bit uncertain! 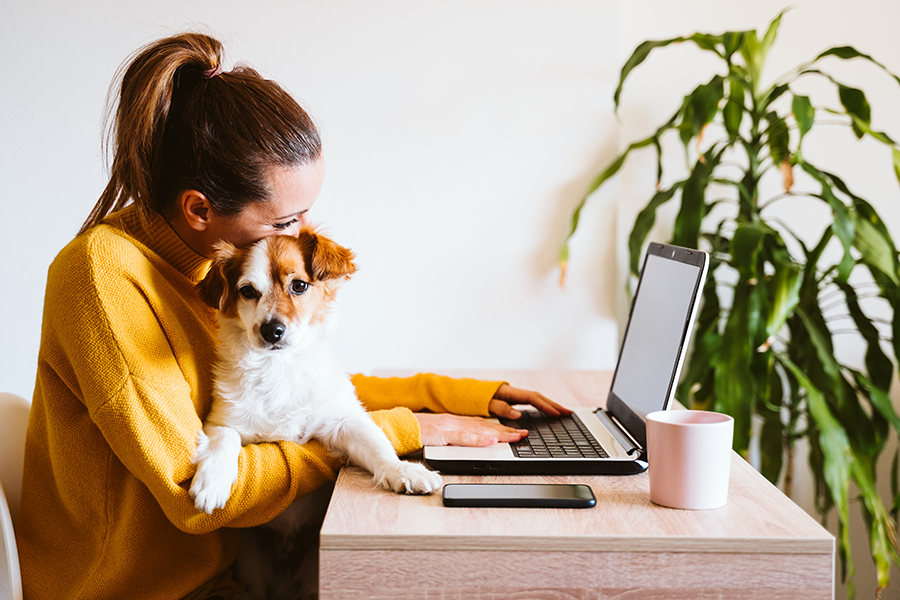 Definitely! And what are Feedr’s plans for the future?

Annie: Since May, we’ve taken a temporary space in another WeWork until September to encourage people to come back and have somewhere to go. We decided on this because we were getting lots of feedback that people felt uncomfortable in a coworking space. I think that if you’re coming into a private office with people from your direct company, people feel more at ease—so that’s how the temporary office space idea came about.

Then, in September, we hope to move in with our parent company, Compass Group, until we find a brand new office space in October. So the plan is to go back to the office working, but not full-time. I think our strategy will be much more hybrid—so maybe two, three days in the office and the rest from home!

Why did you choose the hybrid approach?

Annie: I think flexible working was something many people were looking for before the pandemic—and a lot of companies were quite reluctant to allow that to happen. And while the pandemic has proven that we all can work effectively from home, that desire to go in and interact with people is still there. You can’t replace face-to-face interaction with a video call; it’s just not the same thing.

So, I think if we suddenly removed the option to have that flexibility, it wouldn’t be the right thing to do after a year of working from home. The hybrid offering is a perk; you can come into the office occasionally if you want to. It’s there if you need it. But we’re also going to be okay if you’d prefer to work from home. 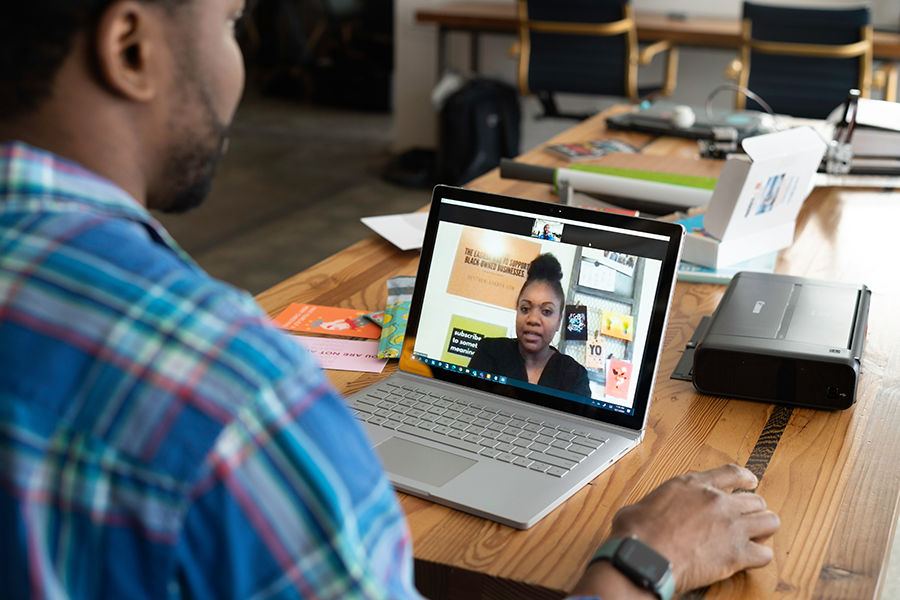 Annie: So when I first joined Feedr back in September, they’d just done a Hubble survey to ask the team how they felt and what they wanted. At that point, the team said they’d appreciate having an office a couple of days a week, but they also like the option to work from home.

So the survey definitely helped with the decision making. I guess it would be interesting to do another one, now that we’re in a much later stage of the pandemic, to see if people still feel the same way. It’s crucial to ask your team what they want, so I hold informal chats with the team every quarter—and this is what led us to take temporary office space.

The decision always involved the employees—and I think that’s how it should be. Because if 70% of them say they’d like to work from home, then you might as well look at how you can cost-save on that too. So, always get their opinion but ultimately, discuss with management as well.

Once you find a new office space, do you think you’ll change the way it’s set up?

Annie: Good question—this is super important. I think the days of people having their dedicated desk space where they have personal items scattered on it are long gone. In a Covid world, I believe a “clean desk” policy is 100% the way to go if you’re going to move back into an office. It’s important to encourage people to not just always sit in that one spot where they make it their own due to hygiene reasons.

But it’s also good to have an office where there’s breakout space, so you can get up from your desk and work somewhere else—be it from the kitchen or breakfast bar or something or just pop into a meeting room quickly. I think having it set up in a way that’s as if you’re at home, so you’re not just stuck in the same place all day long, would be beneficial. It’s definitely something worth thinking about.

But there are also other things you need to take into consideration. For example, I think there’ll always be a need for the traditional banks of desks. Some workers rely on having a monitor on their desk to work effectively, and some may simply prefer it. So, it’s definitely food for thought.

You mentioned Feedr onboarded new team members last September. How have you managed to keep the culture alive while working remotely?

Annie: Yeah, it’s been hard. At the end of 2020, Feedr was still very much plugging into virtual socials, like team quizzes. But we’ve noticed that people are pretty fatigued with that as we’ve rolled into 2021. So, in July, we’re having a summer party where everyone can meet up in a park and last Christmas, we sent everyone a hamper to their homes for our virtual Christmas party—so that was a lovely touch.

They don’t want to be sociable by themselves; they want to get back together. And already, I’ve noticed that the team has started going back into the office. They’ve begun ordering their lunch through Feedr again, which is a great way to encourage people to go back into the office. A free lunch is a massive perk for us as well—that we get to have a say in the vendors that we have; we get to try it; we get to do all the sampling, and that’s something that brings us together! 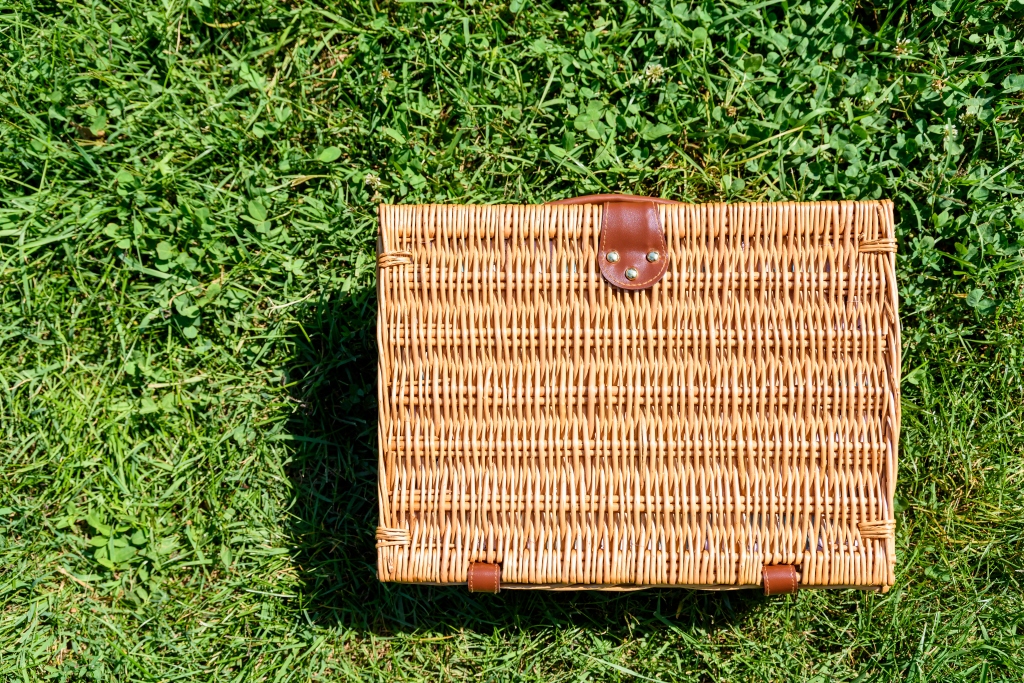 And finally, what’s in store for Feedr over the next six months?

Annie: Feedr will definitely be busy; I can already feel the team starting to get super busy again. For obvious reasons, Feedr had a bit of a hit from lockdown because our primary goal is to provide food for offices. But since people are thinking about returning to the office, we’ve been gearing up for office catering using our Cloud Canteen platform again.

So, it’s all pretty exciting and hopefully means that things will gradually return to normal. We’re just focusing on getting back together as a team as much as we can and finding a new, permanent office space for Q4. I think it’s number one to get back together as much as possible and make sure everyone’s happy and comfortable with our future plans!

Sounds great, Annie—best of luck with everything!