It all started with a humorous tweet back in 2008. 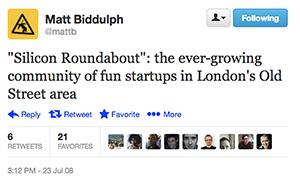 Matt Biddulph, founder of Dopplr, was at the time referring to the early days of Old Street Roundabout, when a collective of innovative tech startups had just begun to colonise the area. In particular, the near derelict Transworld House building had just become home to some of the UK’s most well-known new businesses including Last.fm, Tweetdeck and Moo.com. Matt’s humorous tweet hinted at the fact that Britain’s startup scene was no match to the giants of Silicon Valley.

However, little did he know, within just a couple of years “Silicon Roundabout” would transform into East London Tech City and become home to some of the UK’s most innovative and successful startups on the international stage.

To document the history of the area, we’ve handpicked a notable startup that had office space in Tech City each year since Matt’s inaugural tweet.

Documented in Forward Partner’s oral history of the area, it’s clear that the early days of Silicon Roundabout were characterised by its close-knit community and fun. Perhaps one of the most successful startups from this year, embodying these notions, is Songkick.

The lowdown: Songkick allows you to organise and track your favourite bands, get concert alerts, and buy tickets.

Songkick started life at a Y Combinator in the U.S before moving to East London in 2008, and it seems the culture there influenced what they created in Silicon Roundabout:

“One of the best things about Y Combinator were the weekly dinners where all the startups would meet up and talk about what they’d been working on that week. It was a very developer focused group (around 95% of the founders were hackers) so it was an ideal environment to get feedback on your new code and ideas. When we came back to London we missed the atmosphere at those dinners so decided to try to replicate it.”

Also Moved In This Year: Dopplr, Last.fm, MOO and TweetDeck.

Whilst Silicon Roundabout may have had connotations of fun, many of the startups that would come to define East London Tech City had further-reaching ambitions of social change – with one of the most notable early residents being PodPoint.

The lowdown: Building the infrastructure needed for the mass adoption of electric vehicles in the UK & Europe.

“You wouldn’t necessarily expect to find a Super Car club in the heart of the “Tech City” district of Shoreditch London, nor might you expect to find a converted warehouse inside which 60 or so “EV heads” are trying to change the way Britons travel, but if you know where to look you will find both, and the interesting thing is that one man is behind the success of both ventures.”

David Cameron’s announcement in 2010 of government support to turn East London into a world-leading technology city to rival Silicon Valley suddenly took a bit of the playful fun out of Silicon Roundabout. East London had now become a serious place for business with FinTech leading the way, becoming the home to giants such as FundingCircle.

The lowdown: Lending platform for startups and small businesses.

“It’s not a fundamental reason to move but it’s so attractive. At Bain you wear a suit every day when you’re on a client’s site and you work very long hours but at Funding Circle you come in, you get to wear what you want, and it’s a much more relaxed environment — there’s the pool table, the ping-pong table, that has to be a draw.” 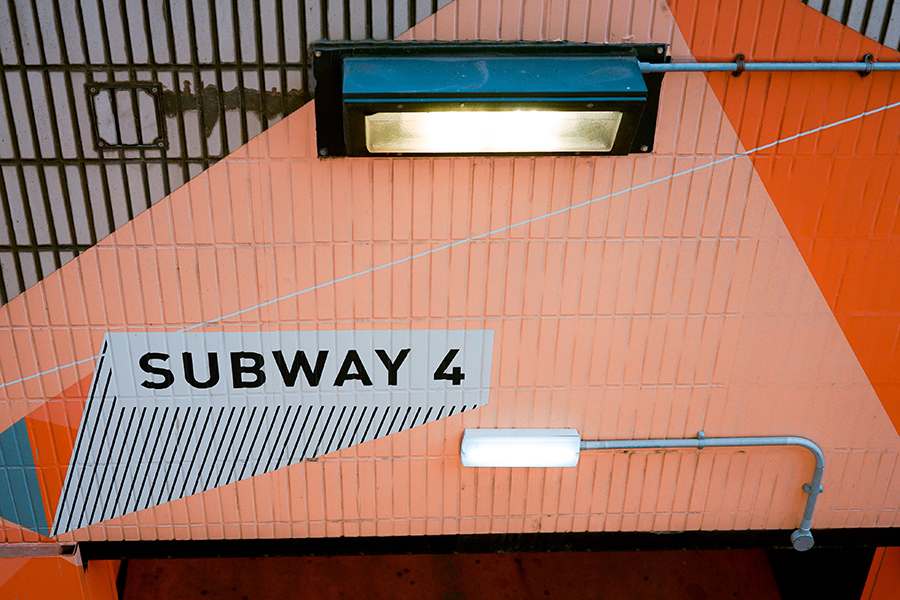 Following on from the previous year, 2011 saw the continued proliferation of FinTech businesses in the area – unsurprising, given the proximity of Tech City to the actual City of London, and the fact that talent from both the financial and tech industries were all in one place. Perhaps the most notable of these FinTech companies was TransferWise.

The lowdown: Enabling people to send and receive money safely from abroad without high fees.

East London Tech City worked out so well for TransferWise that when they started to outgrow their offices, they decided to stay in the area. Two years ago they used interior design firm ThirdWay Interiors to design their new offices in Shoreditch – featuring innovative facilities such as table tennis tables…and a sauna.

“What I find exciting is how effective people are when they’re running their own business. The motivation that you find in Tech City is inspiring, and I like being part of the startup gang culture.”

Also Moved In This Year: MindCandy, Firebox, Gocardless and Duedil.

Rapid developments in technology, especially AI and augmented reality, saw huge investment in these areas in 2012. One of the most highly funded companies in this sector was Improbable.

Improbable’s rapid growth since conception has led to them move to a new office in Spitalfields, to accommodate their expanding team. The company now employs around 320 people in its new London office at 10 Bishops Square, which is made up of 58,000 square feet of office space, meeting rooms, and recreation areas.

Also Moved In This Year: YPlan, Onfido and Import.io

Innovations in food tech seemed to be highlights of 2013, with restaurant marketing and takeaway delivery service Deliveroo moving to the Old Street area this year.

The lowdown: Technology company focused on marketing, selling, and delivering restaurant meals to homes and offices.

“Food delivery has proved to be one of London’s “Tech City” disruptive success stories. Deliveroo, which delivers restaurant food to homes, raised an incredible $70 million series C round in January [2015].”

It’s no coincidence that the coworking boom has seen its rapid expansion in tandem with London’s Tech City development. The huge surge in startups over this period helped give rise to us here at Hubble.

The lowdown: The booking.com for flexible office space.

“When we were first looking for an office, we wanted to be somewhere near our initial customers. Back then, these were mostly startups and they were all based in Tech City. Not only did this help with meetings but it also allowed us to immerse ourselves in the same environment and understand better the office space struggles they were having. It’s also an area with great food!” 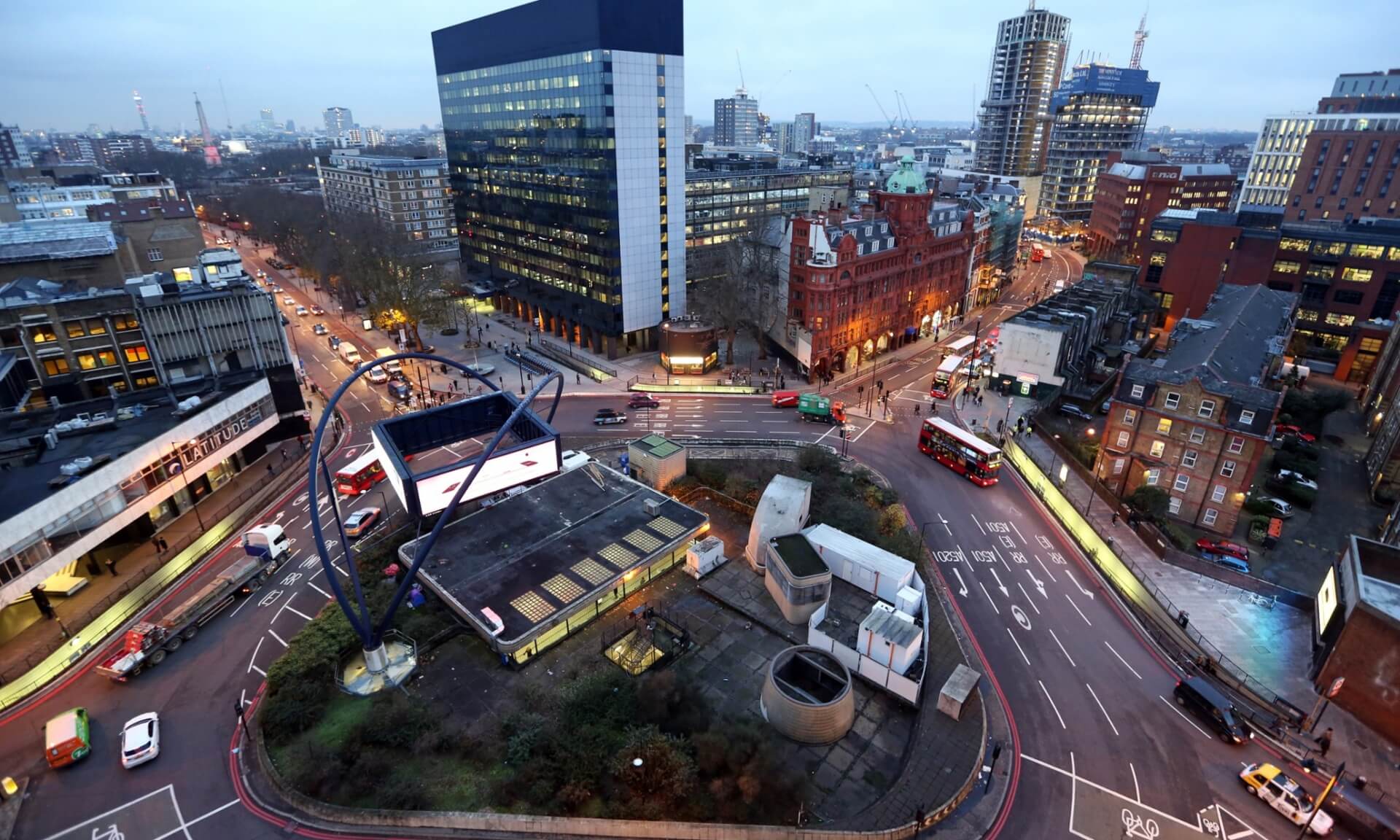 With many startups finding themselves priced out of the Old Street area, it’s perhaps no surprise that the notable companies based here this year were, once again, well-funded FinTechs. One of the most well-known of these is Monzo.

The lowdown: Digital, mobile-only bank founded in the UK.

Monzo actually found their first office through us at Hubble, and have since rocketed in terms of success and popularity. Like TransferWise, Monzo’s rapid growth since the early days has resulted in them moving offices a number of times. Also in the same way, Monzo have also chosen to stay based in East London Tech City, with their current spot just off Finsbury Square.

Also Moved In This Year: Habito, Hibob and Bulb.

Nested’s current location in Holborn places them right on the very edge of East London Tech City (borderline central, some might say). However, this is very much a business rooted in the values held by many of the “Silicon Roundabout early days” startups; ex-Songkick CTO Phil Cowans is one of Nested’s co-founders.

Also Moved In This Year: Vinterior, CharlieHR and Beeline.

It’s hard to imagine anything more “East London” than a firm which specialises in turning push bikes into electric ones. This sounds like a business that could have played a bit part in Nathan Barley, circa 2005, so it’s surprising it has taken so long for an idea like this to come so successfully to fruition.

The lowdown: Swytching push bikes into electric ones.

“Our Hackney office is slightly hidden inside a converted warehouse on an industrial estate (yes, classic Hackney Wick). Inside our showroom we have a huge range of eBikes that can be taken for test rides in the surrounding Hackney area and Olympic park.”

Also Moved In This Year: HubrisOne, Doctorly and Residently.

What better way to finish this history by referencing a fellow PropTech company? Dot Residential are on the other side of the fence to us though, helping create efficiency in the residential sector.

The lowdown: Building a global housing brand focused on delivering beautifully designed homes that people love to live in.

Dot Residential’s current location in Clerkenwell, places them close to the heart of Tech City. Like Hubble, Dot has a passion for improving the property market through speed and efficiency.

“Dot has a long-term goal of improving housing through efficiency. The first and most important ingredient in our ecosystem is the mortgage, so we’re excited to have created a financing solution that’s faster and more flexible than anything else in the market.”

The next standout startup?

Could it be yours? Find office space in Tech City in just a few clicks via Hubble: