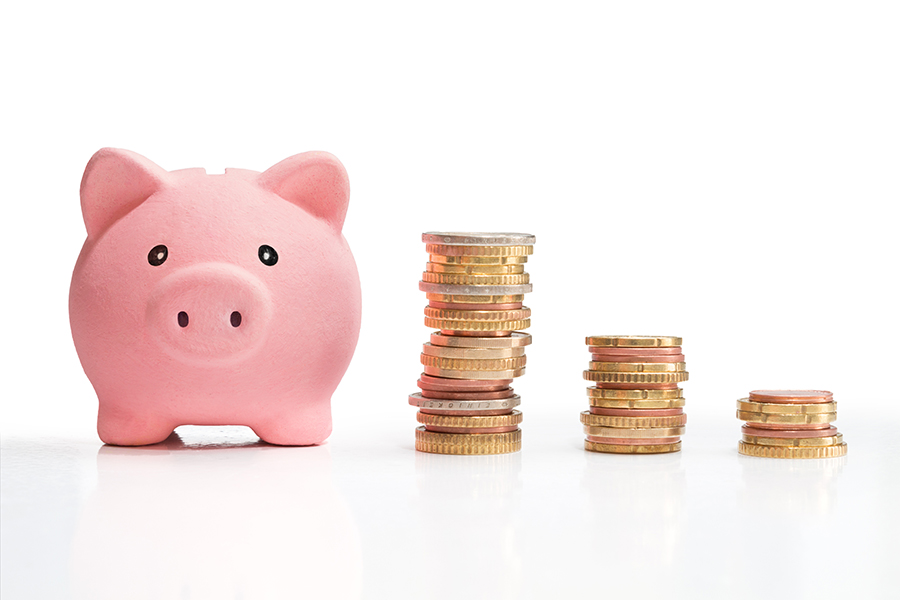 Google ‘average office rental for London startup businesses’ and you’ll get a figure somewhere around £350 for everywhere except central London (where it’ll be almost double that). For most London startups, that can be a moment where the heart sinks and you start wondering whether it’s time to pawn the car.

But we’ll let you into a not especially well-kept secret. Dig a little deeper and you can find office space in London that’s available for much, much less. We’re not talking about sacrificing a private office in favour of a hot desk to save yourself £100 per month. Or sacrificing luxuries: Nor are we necessarily talking about sacrificing luxuries: the gym, the terrace, the on-site cafe serving free coffee. We are in fact talking about private office for half, and sometimes a third, of what you’d expect to pay according to area averages.  And if you are looking for shared office space in London, you’ll find loads of options available for less than the going rate in this selection too.

We’ve chosen the following spaces as they offer private offices for significantly below the average price per desk in their respective areas. Many of them also offer coworking and shared office spaces, often for even lower rents than the private offices.

All of these include breakout space, meeting rooms and WiFi. And just to be clear: we’ve not arrived at the impressively low monthly rents by assuming you’ll be taking over an entire floor of the following developments. For easy comparison, we’ve taken the smallest room available and assumed maximum occupancy (typically 4 or 6 people).

As noted above, just because the rents are low, don’t assume the spec is. Many of these spaces offer premium spaces for much less than premium prices.

All prices correct as of October 2019. 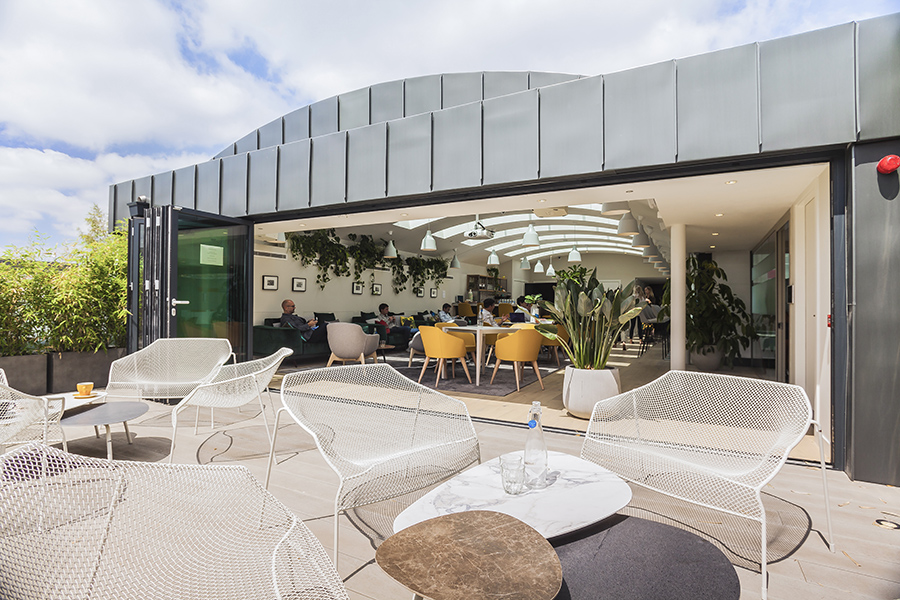 Every day, we talk to someone who tells us that whilst they would love a central London office, they’ve decided to be more realistic and focus on areas that are a little more within their price range. And every day, we show them offices like the ones in this selection that have them tearing up their preconceived ideas. Yes, the average central London desk will cost you £655. But that’s the thing with average prices – there are always as many prices below average, as there are above. You’ll find the following spaces at around £290 per month, per person. What? The bargain price doesn’t come at the cost of features. Welcome practicalities include flexible contracts, high-speed internet and two communal meeting rooms, free of charge. The wellbeing side of things is covered by organic tea and coffee, dog friendliness, and bike storage, for those who cycle in. They’re not ranked as one of the UK’s top co-working spaces for nothing! 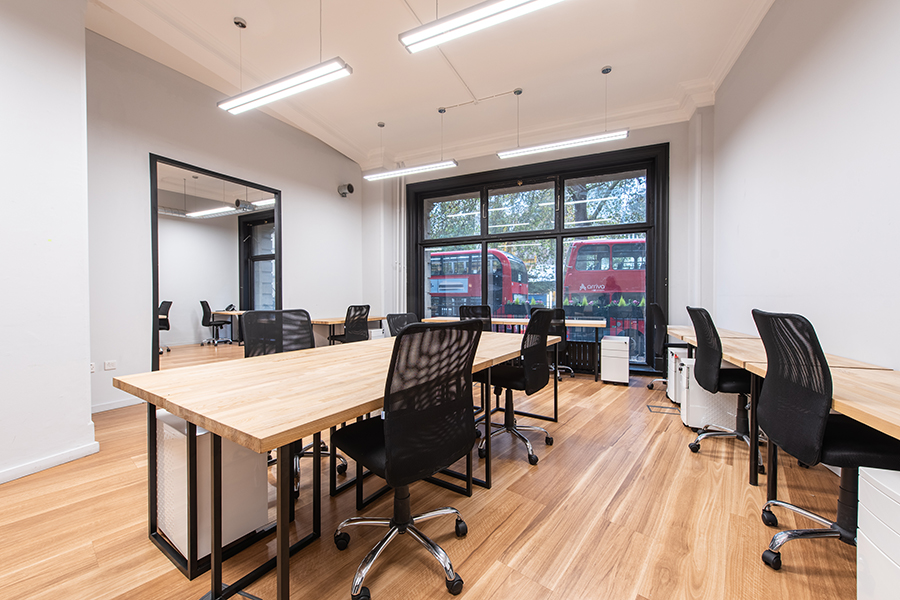 What? An office complex to give every other development façade envy, this glorious Finsbury Circle workspace offers 24/7 access, a wide choice of workspaces and the tube just around the corner. Meeting rooms cost extra, but you’ll get free credits when you sign up. A brilliant, low-cost way of placing yourself in the heart of the city.

The average rent for office space for a startup business in East London may be far less than you’ll pay in central locations (£393 as of October 2019), but it can still be a stretch for the cashflow-challenged. Happily, these offices take the rent even lower, from £200-£300 per desk per month for private offices. 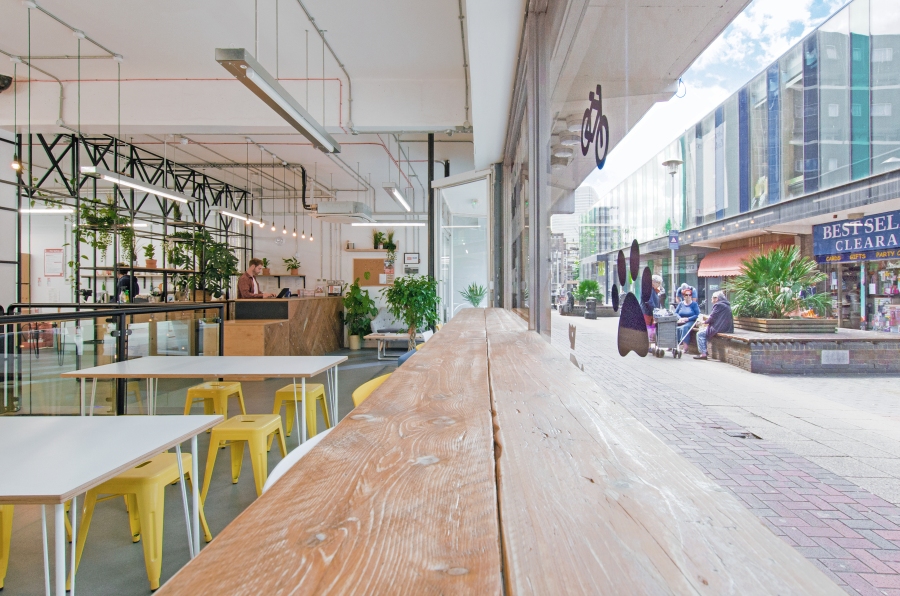 Where? All Saints, East London

What? There’s a buzzing market feel to this Launch 22, which is appropriate because the development forms part of what was the UK’s first purpose-built, pedestrianised marketplace. Light, airy and quirky, its private offices are brilliant value, and we think it’s one of the best coworking spaces London has to offer. 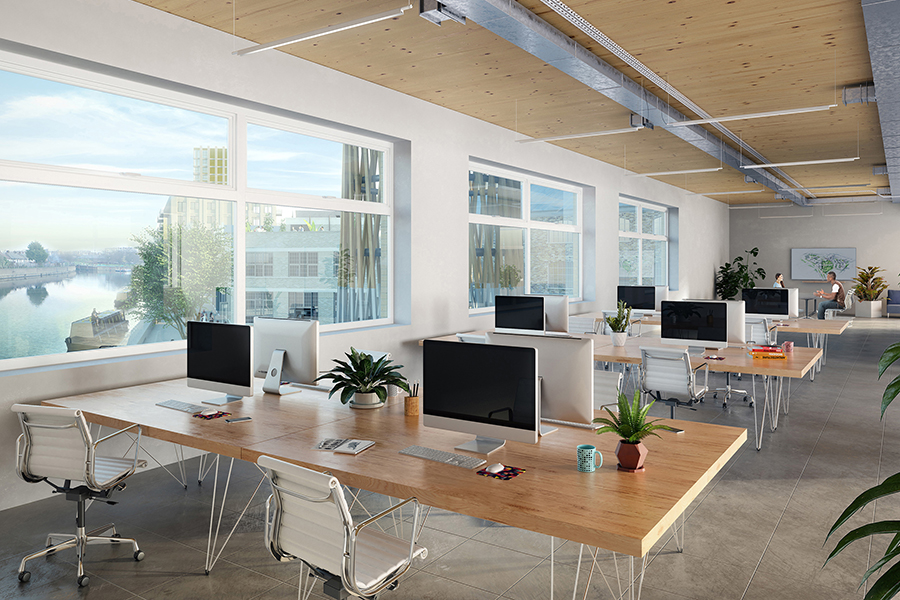 What? Granted, there aren’t many startups looking for long term leases for 15 workers, but if you’re past the initial set-up phase and looking to grow, here’s an office that gives you at least three years of security, riverside views, and the draw of Dane’s yard, with it’s bars, rivers and happy (traffic-free) buzz.

The area average may be £369, but if you’re looking for a great value base for your London startup company, you might want us to do a little better than that. These two let you rip up that average and instead choose some of London’s lowest rates. 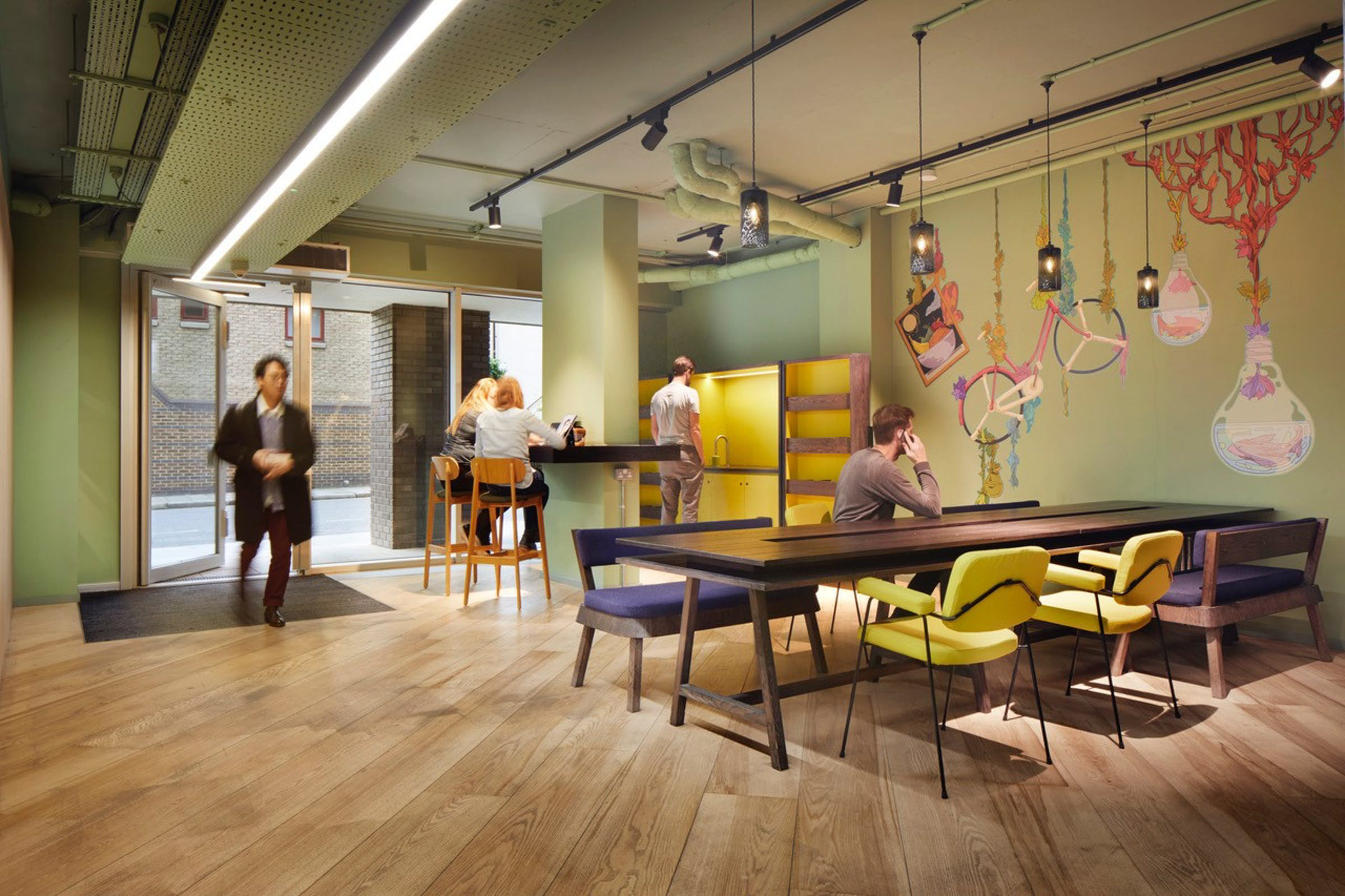 What? Not only do you get stylish office space on the canal side for little more than £200 per person per month; you also get a bespoke space you can customise to your own requirements – including branding. 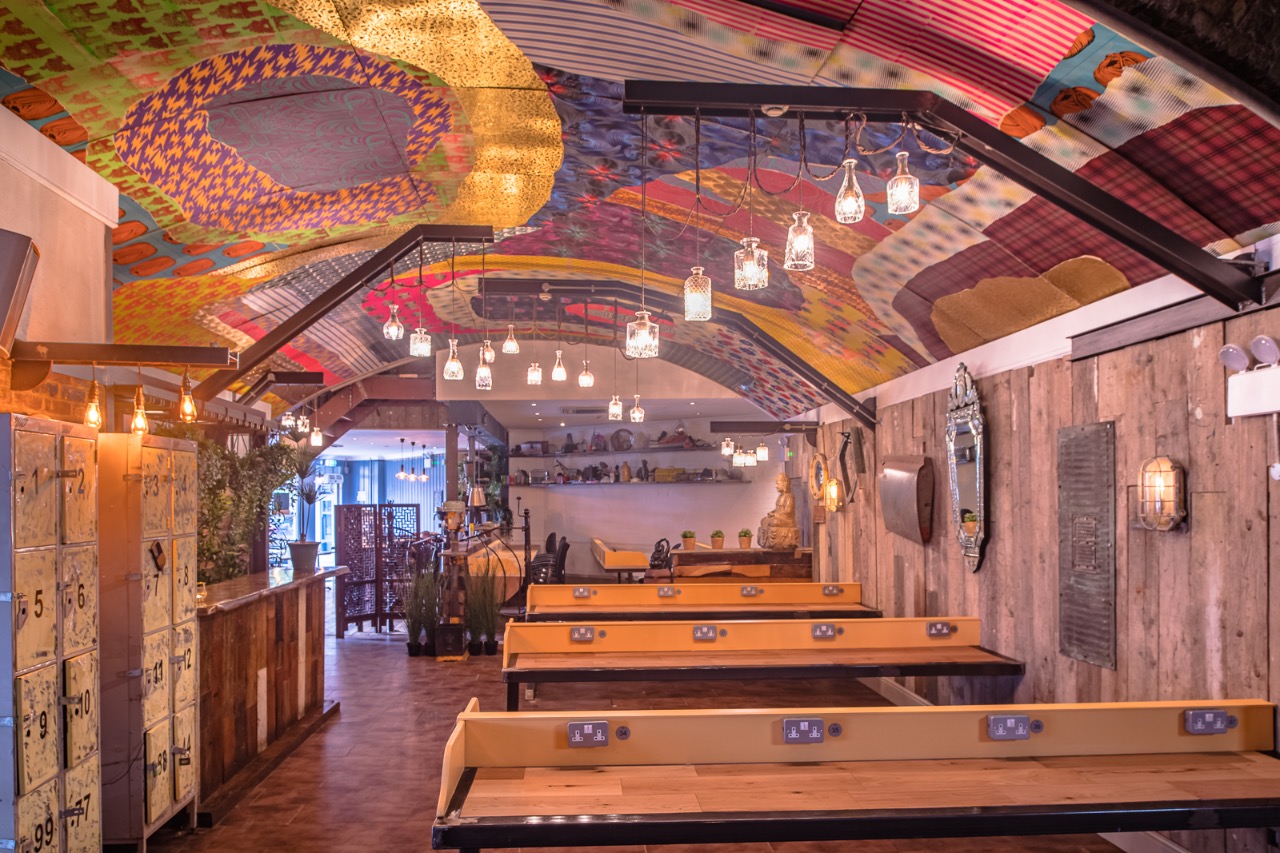 What? This office is easily a HubbleHQ favourite. The chic and quirky decor is both welcoming and cosy, perfect for generating fresh and creative ideas. Sign up to a 6 month minimum lease and in return get a beautifully eccentric space for a squeak over £200 per person, per month, assuming you fill to its 65 person capacity. Mind you, at that price, you can put eight team members in here and it would still be great value.

What is it with South London and community-spirited office space? Arguably more than anywhere else in the city (and country), South London boasts an impressive pool of office space built on community creativity, diversity and collaboration. All of which means two things: i) it’s a fantastic place to build a business as you build connections; and ii) you can find rents for much less than the area average of £359 per person. Such as… 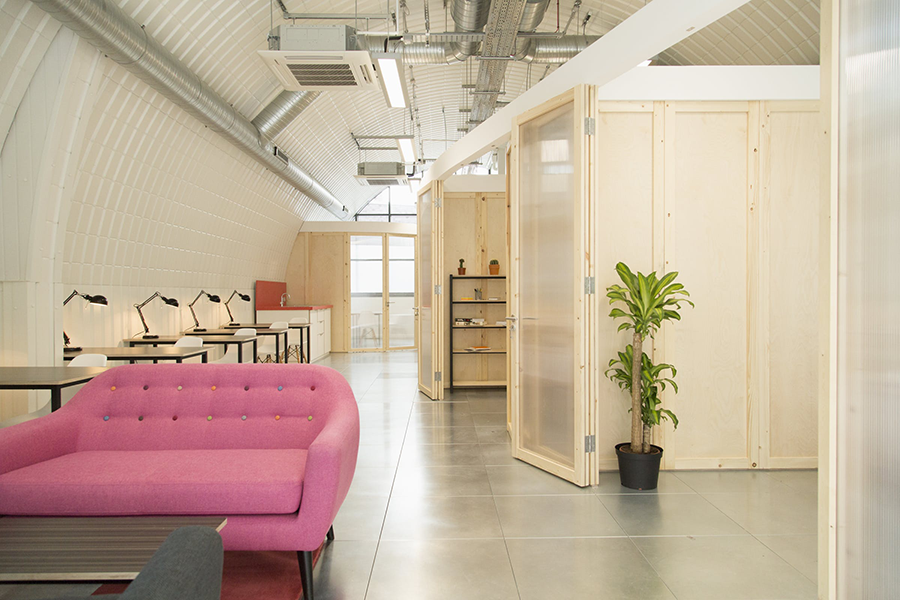 What? All inclusive, no ties simplicity in a range of private offices for 4-20 people. Whether you choose to startup or scale up here, you’ll be renting this bright, contemporary space at between half and a third of the area average. What’s not to like? 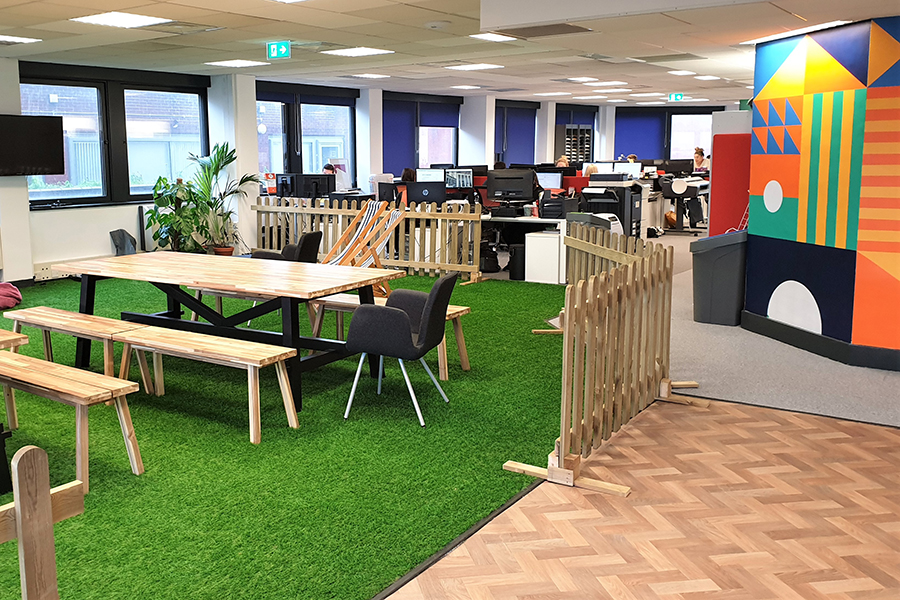 What? When private offices start from under £200 per person per month (assuming there are at least six people in your startup/scaleup) you know you’re onto a good deal. And with some of the best value coworking spaces in London, there are also options if you’re a startup of one. The focus on community and not for profit here creates a vibrant, community feel. 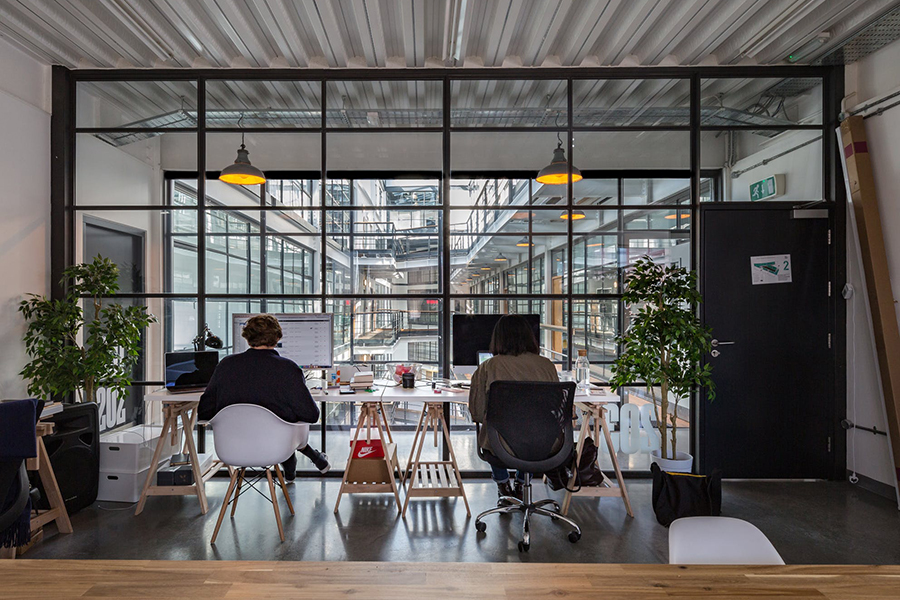 What? Private offices from under £300 per person per month is nothing to sniff at, but add in three months free when you take a two year lease (at time of writing) and the value becomes even more impressive. And with offices for three people, you can be at the very start of your journey as a startup business and still benefit from the low prices. 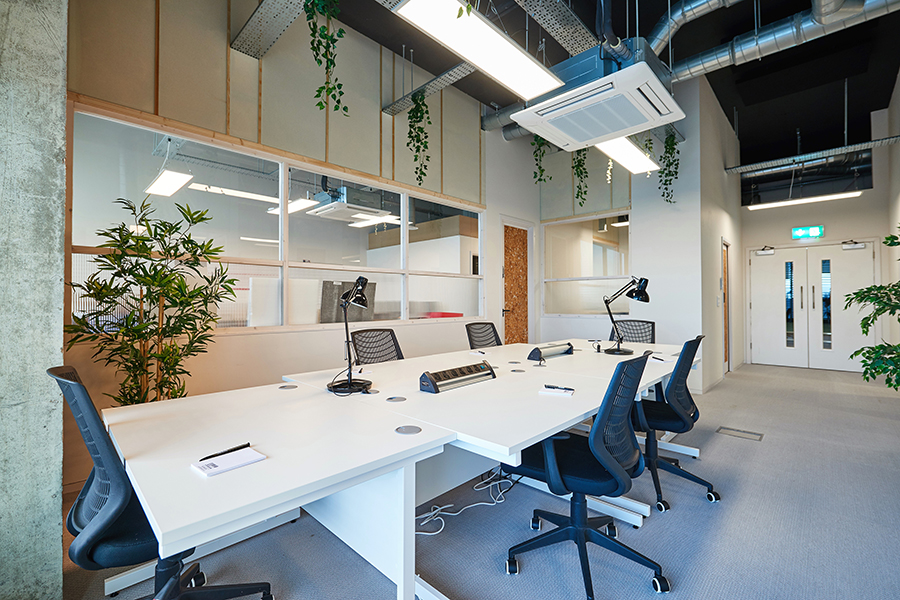 What? There’s loads of variety here. Private offices, hot desks and fixed desks for startup business and scaleups with a workforce of 1-70, and prices from under £200 per person per month depending on office and occupancy. The low price doesn’t mean sacrificing the prestige appearance though. With top spec throughout (take a minute to look at the slides) it’s a premium space to bring clients for a price way below the area average.

Could startup grants help you cut the price even more?

Startup grants could lower your startup costs and make it even easier to pay the rent. Grant funding isn’t usually available purely because you’re a startup, but you may be eligible if you’re a startup business whose activities align with the priorities of the Mayor of London. These include:

Most opportunities are available in every London borough. Find out more about startup grants in London here.

Looking for startup office space that frees up more of your money? Jump on a call with our experts now or start your search.